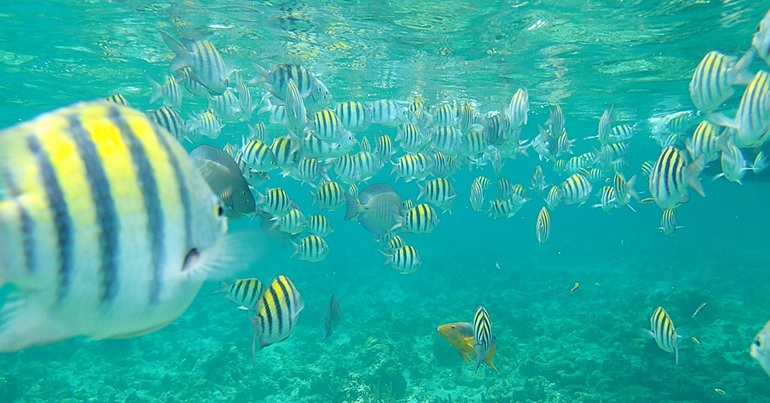 Diatoms are tiny organisms in the ocean that have a big impact on many lives. These little plankton provide about 20% of oxygen in the air we breathe, according to biologist Andrew Alverson. They are also an integral and foundational part of the ocean food web. As Alverson explained, diatoms:

play an immense role in keeping the planet’s ecosystem working

Until recently, scientists believed that diatoms wouldn’t be impacted by ocean acidification. This is the change in ocean chemistry that’s occurring due to our excessive carbon emissions.

However, new research suggests that diatoms could face steep declines as a result of acidification.

The ocean absorbs around 25% or more of the extensive carbon emissions we produce each year. Due to the chemical reactions that occur as a result, the ocean is becoming more acidic. Many organisms have shells and skeletons made of calcium carbonate that risk disintegration in acidic waters. As such, ocean acidification is a threat to organisms like corals, along with many others. Sea butterflies in the Antarctic, for example, are losing their shells.

Diatoms are different, however. Their protective shells are made of silica, like a glass house. So scientists have considered diatoms to be at low risk from ocean acidification, or even the better for it. However, researchers from GEOMAR Helmholtz Centre for Ocean Research Kiel, the University of Tasmania, and the Institute of Geological and Nuclear Sciences Limited New Zealand have sounded the alarm over diatoms in a recent paper.

Their study reveals an “unexpected negative impact” of CO2 on the organisms. Based on the analysis of field experiments, “global observational data”, and scientific modelling, they found that an acidic ocean will cause the silica shells to dissolve more slowly. This means that the diatoms will sink lower down, rather than dissolving closer to the surface – so the silica will be lost to the deep ocean.

The oceans are acidifying, reducing the solubility of diatom shells. This N&V explains how this could have far-reaching effects on the export of elements to the deep ocean https://t.co/2jw9lXU8Nq pic.twitter.com/yageIqcQPe

Essentially, the acidification will disrupt the recycling system of diatoms, wherein their shells dissolve closer to the surface and release their nutrients back into the water for other diatoms to build shells from.

ScienceAlert reported that the study, published by the journal Nature, asserts that diatoms could drop by as much as 26% by 2200.

GEOMAR’s marine biologist and first author of the study, Dr. Jan Taucher, said that the researchers expect a 10% loss by the end of the current century. He explained that:

Since diatoms are one of the most important plankton groups in the ocean, their decline could lead to a significant shift in the marine food web or even a change for the ocean as a carbon sink.

Meanwhile, GEOMAR describes diatoms as the “main driver” of the “biological carbon pump”. These algae are photosynthetic, meaning they absorb CO2 and sunlight to produce food and oxygen. As ScienceAlert explained, diatoms are:

one of the reasons the oceans have managed to absorb a huge chunk of the excess CO2 we humans have been producing.

The field experiments analysed in the study covered a variety of ocean regions, from subtropical areas to the Arctic. Taucher said that the researchers’ “overarching analysis” of these experiments and other data aimed “to find out how ocean acidification affects diatoms on a global scale”. He explained:

Our study uses diatoms as an example to show how small-scale effects can lead to ocean-wide changes with unforeseen and far-reaching consequences for marine ecosystems and matter cycles.

This study once again highlights the complexity of the Earth system and the associated difficulty in predicting the consequences of man-made climate change in its entirety. Surprises of this kind remind us again and again of the incalculable risks we run if we do not counteract climate change swiftly and decisively.

Featured image via Dameon Hudson / Wikimedia, cropped to 770×403, licensed under CC BY 3.0