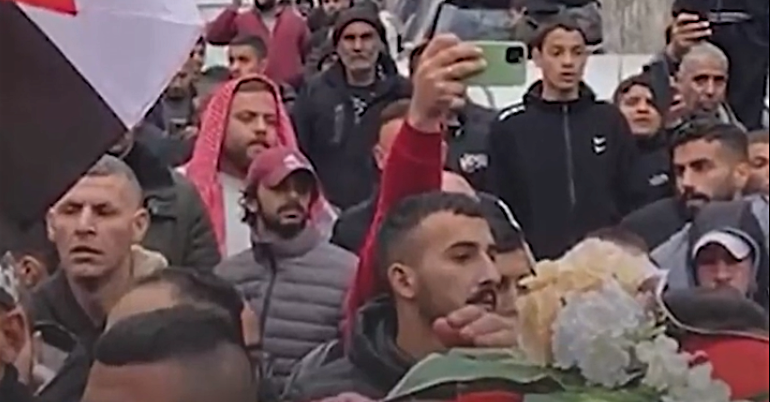 Israeli forces have shot dead 14-year-old Omar Lotfi Khumour in a dawn raid on Bethlehem’s Dheisheh refugee camp. Omar was shot in the head on 16 January, and died in hospital.

So far in 2023, Israeli forces have killed 14 Palestinians. Three of them were children.

BREAKING: 14-year-old Palestinian child Omar Khumour has succumbed to critical injuries that he sustained by Israeli occupation forces at dawn today after storming the Dheisheh refugee camp in Bethlehem. pic.twitter.com/rgI5KR1nFd

They also tweeted a video of Omar’s funeral, which hundreds attended:

Hundreds of people mourn 14-year-old Palestinian child Omar Khumour, who was murdered by Israeli forces in the Dheisheh refugee camp in Bethlehem. pic.twitter.com/2XfT4aquG6

Direct action group Palestine Action pointed out that Britain is complicit in arming Israel. Israeli company Elbit – which has several factories in the UK – manufactures ammunition for the Israeli army:

Today, Omar Khumour, a Palestinian aged 14 was shot dead by the Israeli military, which is armed to the teeth with British made weapons #ShutElbitDown #FreePalestine https://t.co/OfZbNzivFO

The murder of Omar is part of a series of brutal killings of young Palestinians living in Dheisheh.

In December 2022, a friend and I visited comrades living in the camp. They took us to the spot where 22-year-old Omar Manna Fararja was hit with a hail of bullets by Israeli forces. The street – where we could still clearly see bullet holes in the pavement – was decorated with a mural of Omar. People had left a photo there in his memory.

We were told that the Israeli military had entered Dheisheh and detained a group of Palestinians in a school opposite the entrance to the camp. Omar and his friends – thinking that the soldiers had left – went to see if the kidnapped people were okay. However, snipers were still occupying a nearby roof. They opened fire on the young men, killing Omar and wounding six others.

Our friends also took us to Al Khader – a few kilometres from Dheisheh – where soldiers shot dead 15-year-old Zaid Mohammed Saeed Ghunaim in May 2022. Israeli forces had stormed the area, which is close to the colonial settlement of Efrat.

B’Tselem’s investigations have found that soldiers and police routinely shoot and kill Palestinians even when they pose no danger. Israel’s apartheid regime uses violence against Palestinians as a way to cement Jewish supremacy in the area under its control. That is why no one will be held to account for these unjustified killings – the forces who pulled the trigger, the commanders who gave the order, the legal advisors who authorized the open-fire policy, or the top military and political echelons that put the regime’s principles into practice every day.

Dheisheh camp is often remembered because of the brutality of Israeli forces against the people living there. In 2018 Shoal Collective wrote:

Dheisheh is one of the places where the spirit of resistance is strongest in Palestine. It is a camp which was established in 1949 to house refugees from the villages that had been ethnically cleansed by the Zionist forces. Its walls are covered in murals showing pictures of keys (representing the keys to lost homes that the refugees had carried with them); the names of the villages destroyed by the Zionist invaders; lines of poems by Mahmoud Darwish and a picture of Leila Khaled, the communist guerilla who helped the Popular Front for the Liberation of Palestine (PFLP) hijack a plane in the 1960s.

The army attack Dheisheh often. It isn’t easy for them to enter Dheisheh [because of the resistance] but recently they have started to use the strategy of dressing up like Palestinian citizens and entering Dheisheh with cars that have Palestinian plates.

Whenever they’re in Dheisheh you feel like you’re in a war. They use sound bombs, tear gas, and shoot automatic rifles. You can hear shouting and Palestinian people being injured. [I often hear] injured people screaming in pain or pleading for an ambulance. They attack and arrest people from the street. Sometimes they detain people and blindfold them and leave them in the street for hours.

Sireen said that the army want to break people’s resistance, but that they are failing:

The army often comes and attacks the camp at 1 or 2am, but recently they have started coming at 5am or 6am. They want to break the resistance. Because even now the people keep resisting. Whenever the army attacks, people resist. The women throw shoes at the army when they come to attack our homes.

Sireen said that she appreciates the way people look out for each other in Dheisheh:

When I put my feet in Dheisheh I felt like I was a tree, and that my roots were going deep under the streets of Dheisheh… I felt close to the people there. I like the way that the people here stand with each other. How they still feel connected to each other.

Palestinians are calling for a United Nations investigation into the killings, and to impose a military embargo against the Israeli state:

Apartheid Israel has murdered 4 Palestinian children in 2023 so far. We call for #UNinvestigateApartheid.

Last year was the most deadly year since 2005 in Palestine. But Israel’s violence against Palestinians is constant, and ever increasing. Now more than ever we need to stand with the Palestinian anti-colonial struggle, and join the boycott of Israeli militarism and apartheid.

Tom Anderson is a member of Shoal Collective