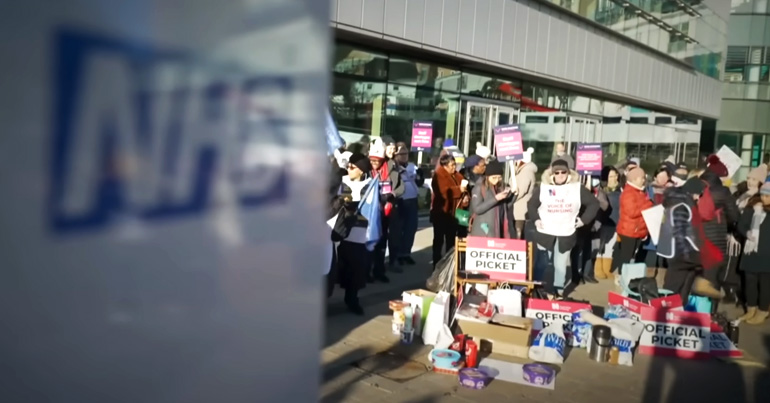 Nurses’ strikes are taking place across England today, 18 January, following the government’s ongoing refusal to discuss pay. A second day of strikes will also take place on 19 January. And, a recent poll shows the public support for such action isn’t waning.

The Royal College of Nursing (RCN) accused the government of failing to negotiate seriously on improving their pay deal for the current year. The union said it is campaigning for the pay rise “to help tackle chronic staff shortages”. It said in September 2022 that more than 40,000 nurses had stopped working for the NHS in the previous year.

We take strike action with a heavy heavy heart but a clear mind about what we want to achieve.

A majority of the public still support the nurses’ strikes

As it perpetuates industrial action through its refusal to enter negotiations, the government has also claimed strikes are the reason for a failing NHS. Health secretary Steve Barclay said the strikes will have an “inevitable” strike action will “impact on patients”, and continued:

Patients will understandably be worried by the prospect of further strike action by nurses.

He said two days of strikes by nurses in England and Wales in December led to the cancellation of 30,000 elective procedures and outpatient appointments. But Pat Cullen, head of the RCN, said nurses are “the voice of the patient” and has repeatedly urged the government to negotiate over pay to retain beleaguered staff and attract new recruits.

Furthermore, polls continue to show widespread support for strikers, including those from the RCN. A YouGov poll published on Tuesday suggested 63% supported their strike despite disruption to NHS services. Meanwhile, an Opinium poll for the Guardian showed 57% support, versus 33% that opposed the action.

The government could end these strikes – if it wanted to

Matthew Taylor, head of the NHS Confederation, which represents state health care providers in England and Wales, on Wednesday urged ministers to renew pay talks with trade unions. He said:

Our message to the government is to give the NHS a fighting chance and do all you can to bring an end to this damaging dispute.

The NHS Confederation estimated this week’s nursing strikes could cause 4,500 cancelled operations and 25,000 cancelled outpatient appointments. However, Cullen pointed out once again that the government has the power to end the strikes:

My olive branch to governments – asking them to meet me halfway and begin negotiations – is still there. They should grab it.

If the government continues refusing to enter negotiations then the RCN will hold further strikes on 6 and 7 February. The union has said the current series of strikes is at the “highest intensity” in its history.

The UN does not suport the Tories’ anti-strike bill

Meanwhile, workers in other sectors of the NHS also have upcoming strikes planned. GMB, which represents ambulance workers, is also expected to announce that it will resume strike action. It tweeted on 17 January that “government silence on pay gives… no option but to strike”. These looming strikes are taking place against the looming backdrop of an ‘anti-strike’ bill that the Tories are pushing through parliament. The bill will legislate a minimum service level during during strikes, requiring some union members to scab or else face dismissal. However, BBC News reported on 18 January that a UN labour body has criticised the UK government over the way it has promoted its bill.

Both prime minister Rishi Sunak and business secretary Grant Shapps have suggested the bill is supported by the International Labour Organisation (ILO). But when asked about it by BBC News, the ILO’s director general, Gilbert Houngbo, said he was “very worried about workers having to accept situations” due to the threat of sackings.