Frogs' legs trade is threatening the animals with extinction 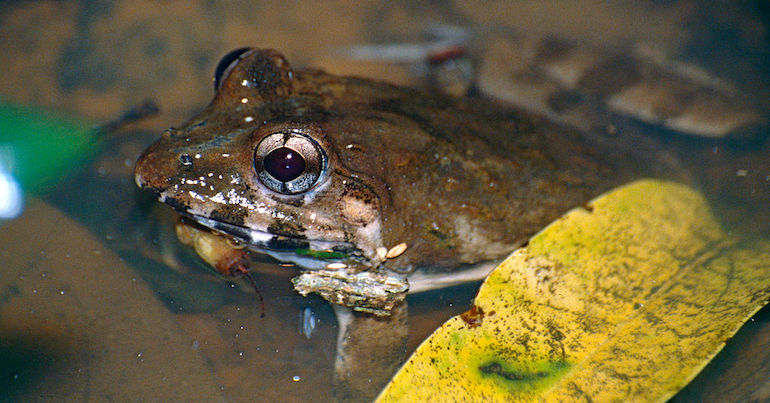 Europeans’ appetite for frogs’ legs is driving an unsustainable and risky trade in amphibians, according to a recent paper.

The authors pinpointed the EU’s role in particular because figures suggest it is the biggest global consumer of frogs’ legs. The paper asserted that the high demand among Europeans, alongside a distinct lack of oversight and regulation, has led to overexploitation of species. This is heightening the risk of extinctions of certain species at a local or regional level, according to the commentary paper.

The authors have called on authorities to implement a variety of measures to ensure the sustainability – and safety – of the trade moving forward.

In 2019, the Intergovernmental Science-Policy Platform on Biodiversity and Ecosystem Services (IPBES) released an assessment that indicated around one million species are at risk of extinction. Alongside corals, amphibians were at the top of the list of threatened animals, with more than 40% of species at risk. The IPBES analysis also highlighted that the direct exploitation of organisms, such as trade in species, is the second largest driver of biodiversity loss.

Nonetheless, the trade in amphibians continues apace. The paper, which the journal Conservation published on 11 January, spotlighted the trade in their body parts in particular – namely their legs. It highlighted that the EU alone imports some 4,070 tonnes of frogs legs each year. This amounts to approximately 81-200 million individual frogs annually, depending on their species and size.

According to the paper, Indonesia is the the main supplier of frogs’ legs to the EU. Vietnam, Turkey, and Albania also export to the bloc. Apart from Vietnam to some extent, which farms amphibians on a large scale, the exporters generally source frogs for the trade from the wild. Farms also replenish purpose-bred populations of amphibians with wild individuals.

The paper’s authors asserted that the primary targets for capture are large-legged frog species, and that “local population declines have been documented”. They described a situation within the trade whereby traders exhaust populations and then simply move onto the next.

Dr Chris Shepherd, the executive director of Monitor, a conservation organisation focused on lesser-known species, voiced similar concerns to the Canary in November 2022. He argued that many species in the international wildlife trade are “being traded into extinction” and “snuffed out, one after the other”.

Impacts of wildlife trade on ecosystems

The authors warned that the vast trade is likely impacting not only targeted frog populations but wider ecosystems too.

Amphibians like to eat insects. As such, removing them can lead to an increase in the populations of their prey. In turn, this can affect food production, as an abundance of insects can impact crop growth. The removal of frogs could therefore ultimately lead to an increased use of pesticides, the paper said. This places a financial burden on people, and poses further health risks to the natural world, including people and any remaining frogs. As biologist Sandra Altherr, who co-founder the German nonprofit Pro Wildlife, emphasised to Mongabay:

the frogs’ legs trade has direct consequences not only for the frog populations themselves, but also for biodiversity and ecosystem health as a whole

A study published in 2022 pointed to other possible consequences. Amphibians eat mosquitoes, which are transmitters of malaria. The study found that malaria incidences in people increased when amphibian populations collapsed in Costa Rica and Panama due to the pathogen fungus Batrachochytrium dendrobatidis (Bd). Bd is devastating amphibians around the world, with 90 species already thought to be extinct due to it. Explaining their findings, the study’s authors said the results provided empirical evidence that amphibian declines:

Moreover, the Conservation paper warned that disease spread along the amphibian trade chain is “uncertain but likely”, such as spreading Bd to new amphibian populations.

Broadly speaking, the wildlife trade is is ripe for disease emergence and transfer due to the health and welfare conditions in the sector.

Despite all the risks associated with the trade in amphibians, the paper’s authors pointed out that it is largely unregulated. Pro Wildlife’s Altherr told the Canary that overall only a “tiny fraction” of amphibians are listed in the Convention on International Trade in Endangered Species of Wild Fauna and Flora (CITES). Those species most heavily traded for their legs, with limited exceptions, have no CITES listings.

CITES is the global body that regulates the trade in a number of species considered at risk of extinction. It lists species in three appendices, ostensibly relating to how at risk the included species are.

Altherr highlighted that the lack of CITES listings for affected species means that in addition to the trade being unregulated, it is “not even monitored”.

Not a precautionary approach

CITES held its 19th conference of the parties (CoP19) – meaning member countries – in November 2022. At the event, countries adopted a decision related to the amphibian trade. It effectively acknowledged that the trade could be endangering species by putting a process in motion to identify the species in international trade and determine whether they need listings.

However, while CITES investigates this, the trade will continue as there’s no provision in the adopted decision to pause the trade in the interim. This is despite the fact that studies have pointed to the extinction risk in the frogs’ legs trade for at least a decade.

In other words, CITES doesn’t appear to be taking a precautionary approach on this matter. Precaution would arguably involve putting a pause on the trade while the body investigates the related extinction risk that researchers have been raising the alarm over for years.

For this reason and more, CITES is “far away from being perfect”, despite being “the best tool we have”, Altherr said. The Pro Wildlife co-founder suggested that in light of the extinction crisis, the body should follow a precautionary approach, rather than “only reacting when the damage to biodiversity has already occurred”. Altherr told the Canary:

we need a reversal of the burden of proof and only allow wildlife trade to happen if its sustainability, traceability, legality and transparency are guaranteed.

Time is not on amphibians’ side

The paper’s authors have called on the EU and CITES parties to take various steps in relation to the frogs’ legs trade. These include listing all “trade-relevant species in legal codes and regulations”, such as in the CITES appendixes, along with the introduction of meaningful monitoring of affected species to ensure sustainability and disease prevention.

Moreover, the authors indicated that the trade sector itself should contribute financially to these measures. Altherr explained that currently “the burden of proof” is on the conservation sector to document the trade and show whether it is sustainable. Instead, the biologist told the Canary:

we suggest that the trade sector should financially contribute to ensure transparency, traceability, legality and sustainability

The Canary contacted the European Commission for comment, but none was received by the time of publication. Its previous comments on the issue, however, give an indication of its position. In June 2022, it effectively said that if source countries called for CITES listings and scientific evidence showed that “international trade threatens the survival of the species”, it would consider supporting action.

In short, the EU would consider action under certain conditions, and CITES is taking slow steps towards considering action. Meanwhile, the trade itself is rapidly and literally eating its way through over three billion frogs a year.

With over 40% of amphibians already looking down the barrel of extinction due to numerous threats – including habitat loss, climate change, and disease – more urgency from these authorities is sorely needed.