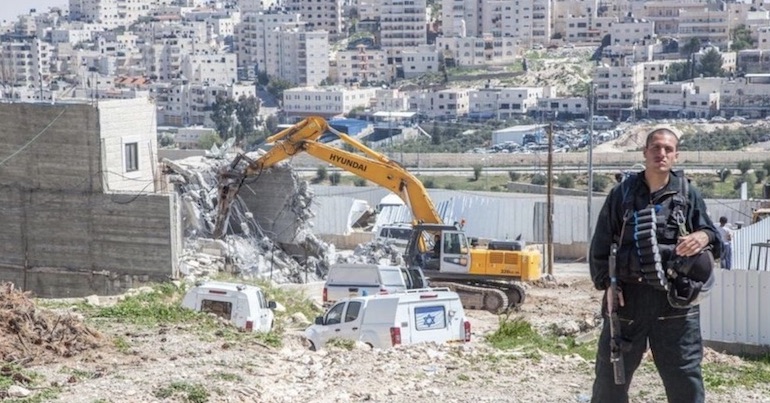 On 22 July, three Palestine solidarity activists were found guilty of blockading a JCB facility in September 2018. The activists were protesting against the use of JCB machinery in Israel’s ongoing policy of demolishing Palestinian homes, communities and livelihoods. On the same day, Israeli forces demolished people’s homes in occupied Palestine. They reportedly used JCB, Hyundai and Caterpillar machinery during the demolition.

The activists were part of the campaign group ‘Stop the Demolitions’. As the group notes:

British company JCB manufactures both civil and military bulldozers, which are regularly used by the Israeli police, military and Civil Administration to demolish Palestinian property. It was JCB machines that rolled into the Bedouin village of Khan al-Ahmar last year to begin the preparations for demolition

The planned demolition of Khan al-Ahmar was widely condemned as a war crime. As a press release from the activists also noted:

Every year, between 400 [and] 1,000 Palestinian homes, schools, trees, businesses, graves or other structures are demolished by the Israeli authorities. Such demolitions have been condemned by human rights organisations as a form of collective punishment and a violation of international law. JCB is one of a number of international companies whose machinery has been used, and the protestors claim that this makes the company complicit in crimes against Palestinians.

On 22 July, the Times of Israel reported that demolitions took place in the “Palestinian Authority-controlled Area A of the West Bank”. It stated:

hundreds of police, border police officers and soldiers arrived on the scene in the area known as Wadi al-Hummus at around 4 a.m.

The Palestinian Authority called this a “grave escalation”.

The United Nations estimated that about 20 people lived in the buildings and that some 350 property owners who had not yet moved in would be affected.

A statement from the UK protesters said this:

demolition has left up to 1,000 people homeless and traumatised, and is believed to be the biggest single demolition of Palestinian homes since 1967. It marks a horrific escalation in Israel’s litany of war crimes.

They took [a] family away – we heard screaming and shouting.

Some images shared on Twitter showed JCB machinery was involved in the demolitions:

Yet as news of the demolitions emerged, so too did a film reportedly showing Israeli soldiers cheering after a building was destroyed:

You won't see this on western media!

Israeli soldiers celebrate and cheer as they blow up a Palestinian house in Jerusalem today. pic.twitter.com/CkgWzkgnNp

A statement explained that the court found activists guilty of causing a “private nuisance”. It also noted that:

the activists had felt there was no option but to take direct action, in view of the fact that the Bamford family, who are the owners of JCB, have repeatedly ignored all attempts to engage with them regarding the use of JCB bulldozers in the demolition of Palestinian homes.

The ‘JCB 3’ also stated that they were:

extremely disappointed and concerned that the Judge had ignored the evidence presented in court that JCB were complicit in the war crimes being committed throughout Palestine by the Israeli government’s systematic policy of home demolitions.

Chris Osmond, one of the three defendants, said:

Two of us who decided to take action at JCB’s Foston site last year have witnessed JCB equipment being used to carry out demolitions in Palestinian communities. On 4th July 2018, I witnessed JCB bulldozers being used to destroy dozens of homes in the Bedouin community of Abu Nuwar in the West Bank. People were pushed out of their houses by the Israeli police and army before JCB bulldozers flattened their property. The motivation for this policy is the colonisation of Palestinian land and it is illegal under international law. JCB could easily stop their equipment from being used in this way. We urge them to do so