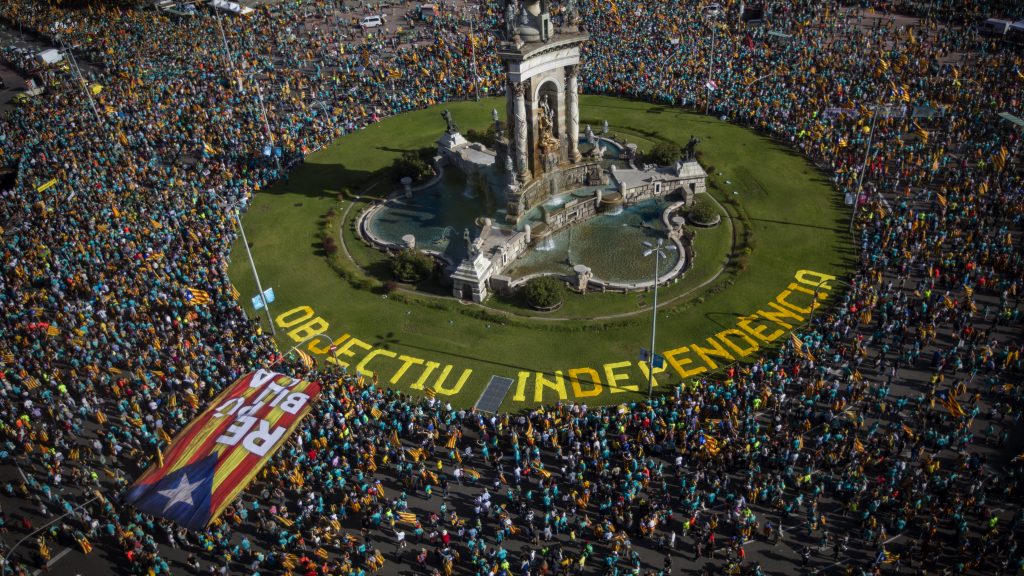 Hundreds of thousands of people who support the secession of Catalonia from Spain gathered in Barcelona on the region’s main holiday just weeks before a highly anticipated verdict in a case against 12 leaders of the independence movement.

Supporters of Catalan secession came from all parts of the region to its main city. Many carried flags or wore T-shirts supporting Catalan independence as they met for the rally in a large public square.

The 11 September holiday memorialises the fall of Barcelona in the Spanish War of Succession in 1714. Since 2012, it has become the date of massive rallies for the region’s independence movement.

The Barcelona police said that around 600,000 people turned out for the event.

Polls and the most recent election results show that the region’s 7.5 million residents are roughly equally split between those in favour and those against breaking with the rest of Spain.

This year’s rally comes while a dozen leaders of Catalonia’s 2017 failed attempt to secede await a verdict from the Supreme Court on charges that include rebellion.

They face spending several years behind bars if found guilty, and a heavy punishment would most likely spark public protests in Catalonia.

The verdict is expected this month or next.

Pro-independence sentiment has been fuelled by economic difficulties in the last decade.

Political parties backing secession have yet to agree on what the response to a guilty verdict by the Supreme Court should be. That has earned the criticism of the leading grassroots groups which have fuelled the secessionist drive.

Regional Catalan president Quim Torra says a guilty verdict would provide an opportunity to make another push for independence, without specifying how that could be carried out.

“The objective of independence should be the horizon of this country after the verdict,” he said in a recent interview on Catalan public television.

Other pro-independence politicians think the best move is to call regional elections in an attempt to increase their representation in the regional parliament and focus on gaining the backing of more than half of the Catalan people.