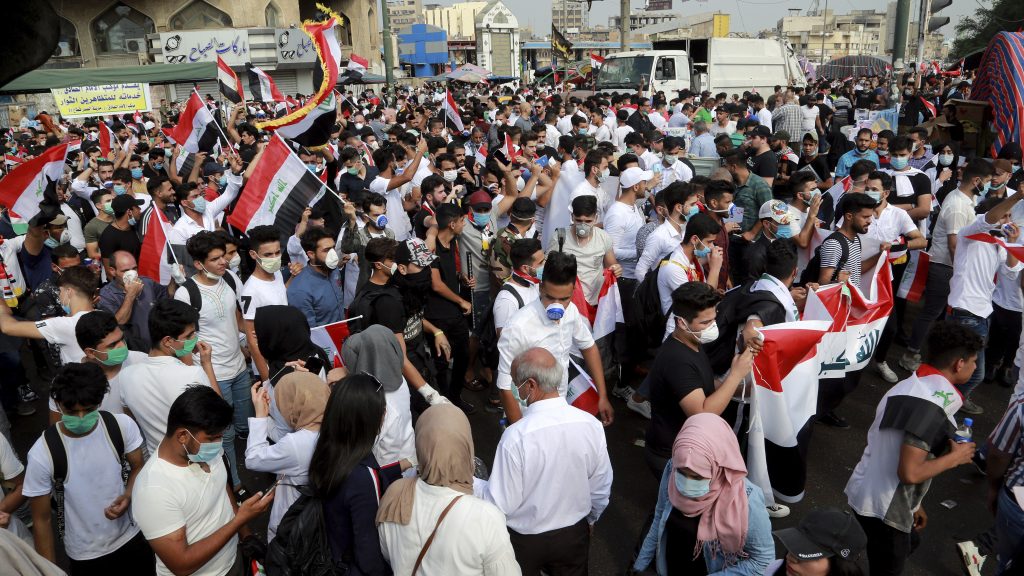 At least 72 protesters have been killed in Iraq since nationwide anti-government protests resumed on Friday, after 149 were killed during an earlier wave of protests this month.

The latest violence comes as thousands of students took to the streets in defiance of a government order and tear gas from security forces. The students missed classes at several universities and secondary schools in Baghdad and across Iraq’s majority-Shiite south to take part in the protests, despite the government ordering schools and universities to operate normally. Authorities later announced a curfew from midnight to 6am in the capital, as renewed protests there and across the Shiite south raged for a fourth day.

The demonstrations are fuelled by anger at corruption, economic stagnation and poor public services.

“It’s a student revolution, no to the government, no to parties!” demonstrators chanted in Baghdad’s Tahrir Square, the epicentre of the protests.

Protesters have camped out in the central roundabout and volunteers have brought them food, hoping to recreate the revolutionary atmosphere of similar rallies held across the region during and after the 2011 Arab Spring. Security forces, meanwhile, have fired tear gas and stun grenades to keep protesters from crossing a main bridge leading to the Green Zone, home to government offices and embassies.

Despite Iraq enjoying monthly oil revenues of over $6 billion, pervasive government corruption since the fall of Saddam Hussein in 2003 has meant that there has been little new building of roads, schools and hospitals and there is a chronic shortage of electricity and, in some cities, water.

Above all there is a lack of jobs with a population pf 38 million, growing by one million year and 70 per cent below the age of 30. Many of these are jobless and include 307,000 graduates. …

Popular anger over long-standing socioeconomic grievances has been increasing year by year and the defeat of Isis in the siege of Mosul in 2017 means that the government no longer has the excuse that all its energies and resources are absorbed by the war against al-Qaeda type groups.

Explanations for the self-destructive reaction of the government this time round include Prime Minister Adel Andul Mahdi’s advisers being dominated by military hawks prone to rely on force and with little political understanding.