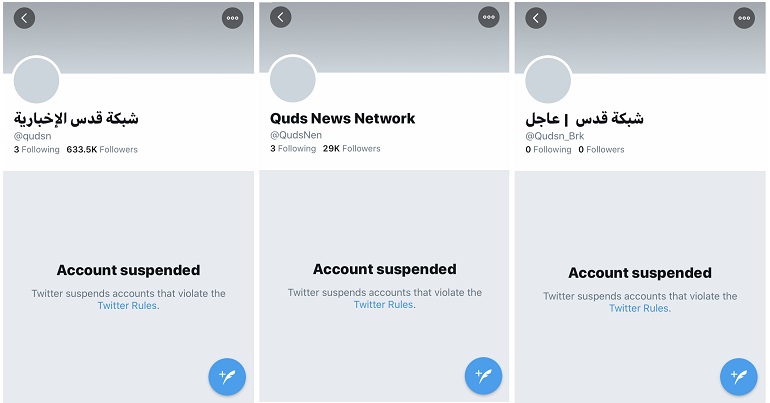 On 2 November, Twitter suspended a number of accounts reporting news from Palestine and Lebanon. Among these were Arabic and English language news accounts of the Palestinian outlet Quds News Network.

Other accounts that Twitter appears to have suspended around the same time include Asra News and Lebanese platforms Al Manar News and Al Ahed News.

Speaking to The Canary, Quds News director Nisreen Al Khatib confirmed these accounts had the blue-tick verification from Twitter.

The account suspensions appear to be arbitrary, as Al Khatib said Twitter did not give any notice or reasons for them.

I am co-director of @QudsNen & I find myself helpless as #Twitter has today morning suspended 3 verified accounts of the network I work with, w/out offering reasons. Quds News Network is an essential site for publishing the Palestinian content in Arabic & English to the world! pic.twitter.com/3q7H4a8xDF

Meanwhile, journalists have described the move as ‘censorship’. Ali Abunimah, co-founder of Electronic Intifada, said that he was “angry and horrified” by the suspension of these accounts:

I’m angry and horrified that @twitter @TwitterMENA has done this to a publication we count on for news from Palestine. I urge everyone to demand that this censorship of Palestinian media be reversed.

This is outrageous. Twitter has arbitrarily suspended multiple Palestinian media accounts. @QudsNen is a crucial source for anyone seeking information on Palestine. These accounts should be reinstated immediately and Twitter should ensure it never happens again.

And a spokesperson from Quds News said to The Canary:

We, at Quds News Network, feel outraged at Twitter’s unprecedented move of suspending our verified accounts that cover the Palestinian issue both in Arabic and English languages. We believe that this step is a complementary step to the censorship war run by Facebook and the Israeli government against the Palestinian content on the internet…

But we assure that nothing will hold us back – the Palestinian people’s voices and suffering must see the light through social media, and our right of freedom of expression must be guaranteed and protected.

The Canary contacted the Twitter press office for a response but it was unable to comment by the time of publication.

Social media platform Facebook has previously admitted to deleting pro-Palestine accounts after pressure from US and Israeli governments. It also deleted a Palestinian news outlet page in March 2018.