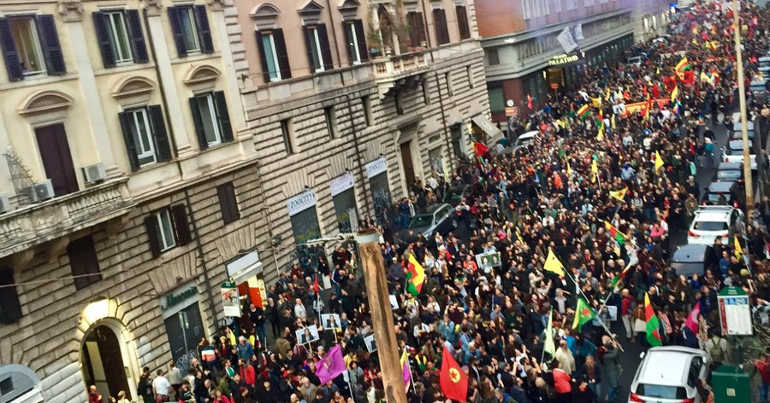 On Saturday 2 November, hundreds of thousands of people took part in a ‘World Resistance Day’ against the Turkish invasion of Northeast Syria (aka Rojava).

At four o’clock sharp in the afternoon [of 9 October], bombs rained down on people in towns and villages on the border. Jihadist militias began their advance under the leadership of the Turkish army and tried to penetrate into the border area. Turkey is talking about a “military operation” aimed at “securing the border” and establishing a so-called “peace corridor”, but the fact is that the Turkish army and the Islamist mercenaries under its command are concerned with nothing less than the occupation of the mostly Kurdish populated entire area along the Turkish-Syrian border.

We call for this year’s November 2nd to be a day of global resistance against the Turkish War of Aggression, to break the normal situation and to paralyze life. Participate in creative and diverse actions of civil disobedience, demonstrations, and many more, and take over the streets and public spaces.

As long as the killing continues, the resistance must not stop.

Demonstrating in the midst of an invasion

In cities across northeast Syria people took to the streets to demonstrate against the invasion. In many places people came out to demonstrate in spite of the risk of attacks by the Turkish forces and its jihadist proxies.

Refugees from Turkey’s 2018 invasion and occupation of Afrin took to the streets in Shehba:

Thousands took to the streets in the city of Derik, close to the border with Iraqi Kurdistan. Derik has experienced Turkish attacks since the beginning of the invasion:

Some of the demonstrators in Derik recorded messages to those taking part in the global solidarity actions:

Hospital workers in Derik, NE #Syria, send their greetings to the world & thank all the people on the streets today!#WorldResistanceDay #WomenDefendRojava #riseup4rojava pic.twitter.com/JfiQGvt0F8

Tens of thousands of people marched on the streets of London:

On #WorldResistanceDay thousands have gathered in #London to show solidarity and march against Erdogans attemp to commit genocide against kurdish people in #Rojava. #riseup4rojava #WomenDefendRojava pic.twitter.com/JtP0EL5yaJ

Yesterday for the fourth weekend in a row UK Kurdish communities, their allies and their supporters marched through central London in solidarity with the women’s revolution in northern and eastern Syria. Across the last four weekends there have been around 30,000 people marching.

We were there in the wind and the rain to say that we will continue this resistance until this illegal invasion is stopped, until the airspace above northern and eastern Syria is shut to Turkish drones, Turkish airstrikes and artillery.

In the US people blocked traffic intersections in solidarity with those resisting invasion:

In Stuttgart 12,000 people took to the streets yesterday on #WorldResistanceDay #RiseUp4Rojava pic.twitter.com/auRSpcmeKk

‘An ethical stance against the exploitation, terrorization and annihilation of the Kurdish people’

Kurdish communities and their supporters have launched a new call for a boycott of Turkey. According to Kurdish academic and activist Dilar Dirik:

Boycotting Turkey is not merely an attempt to economically disrupt a billion-dollar business empire that profits from massacre, authoritarianism and intimidation. It is also an ethical stance against the exploitation, terrorization and annihilation of the Kurdish people and other communities, targeted by the nationalist state mentality of Turkey. Boycotting Turkey means saying no to the normalization and white-washing of dictatorship and genocidal politics.

The Boycott Turkey campaign is calling on holidaymakers not to take their break in Turkey.

During the World Resistance Day, activists in Bristol held a lively picket of TUI travel agency. Calling on travellers not to book holidays in Turkey with TUI:

TUI travel agent in Bristol was forced to close after #boycottturkishholidays demonstrators set off smoke flares in their doorway on #GlobalResistanceDay#DontHolidayinTurkey#RiseUp4Rojava pic.twitter.com/IU2Ji7MsO1

TUI owns or franchises dozens of high end hotels on the Turkish coast.

Demonstrations against travel agencies advertising holidays in Turkey were also held in Thessaloniki, Zurich and Copenhagen:

For the #WorldKobaneDay people in #Winterthur, #Basel and #Zurich took the streets.

In Zurich Oerlikon a turkish travel agency supporting the war against #Rojava was blocked.#riseup4rojava pic.twitter.com/8QSAXisXZO

Activists in Copenhagen talked to travel company to #BoycottTurkey holiday tourism. Owner was Kurdish & claim to support the cause, but continue to deal with the Turkish charter tourism industry. They asked them to reconsider.#WorldResistanceDay#RiseUp4Rojava#WomenDefendRojava pic.twitter.com/75TrXUK7IE

No flights to Turkey

After the blockades at numerous airports, 33 flights of @TurkishAirlines throughout the world have been blocked in recent weeks. The share price collapsed by 25%. #Erdogan is furious and the #AKP is losing money.
We say: Continue!#noflighttoturkey#RiseUp4Rojava pic.twitter.com/YND9WBhXL7

Today was a great day of global #resistance with hundreds of thousands in the streets around the world.

Thanks to everybody who showed our strength is growing every day.

#RiseUp4Rojava’s message is clear, as long as Turkey’s invasion of northeast Syria continues the global resistance will not stop.