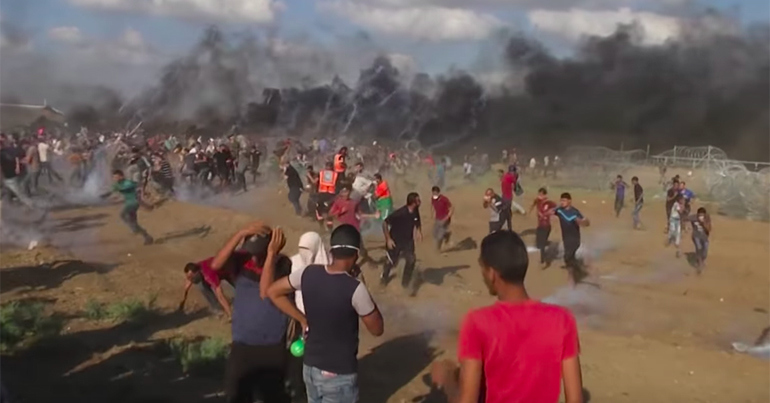 An international group of activists from Gaza 2020: Breaking the Siege were arrested in southern Israel on 13 January after they attempted to cut the military fence separating Israel from the Gaza Strip.

British citizen Julia Lister, 25, was one of those arrested.

Two activists were also arrested on 9 January at the Gaza fence.

“Time has already run out”

According to a press release received by The Canary:

In both cases the activists had intended to cut the fortified border fence and enter Gaza in a forceful but symbolic action to demand an immediate end to the Israeli land, sea and air blockade, which began in 2007 and continues to this day…

Gaza2020: Breaking the Siege’s unprecedented attempt is part of an international movement to break the siege of the strip, inspired by the Free Gaza Movement, which has challenged the Israeli naval blockade by sending dozens of boats carrying aid to Gaza…

The action fell on the 16th anniversary of the death of British activist Tom Hurndall, nine months after he was shot in the head by Israeli snipers in Gaza in 2003.

The people of Gaza cannot live another year under siege. It is no longer a matter of time running out. Time has already run out.

The arrestees were held for over 10 hours at the Ofakim police station in southern Israel and interrogated. According to the press release:

The activists were told by officers that secret services had been aware of the action from tapping their phones. They were later released at around 7:40pm, and banned from entering the south of Israel.

Lister: “we can start movements at grassroots level”

Julia Lister is a photographer and English-language teacher who has travelled to Palestine several times to do solidarity work. She said:

I would like to remind the people of Britain that we can start movements at grassroots level to put pressure on MPs, urging them to change policies and withdraw our country’s support for the Israeli occupation and apartheid regime.

I would like to ask the British public to join us in demanding an end to the 13-year blockade of the Gaza strip and the countless routine violations of international law and basic human rights perpetrated by the Israeli government and its occupying forces.

Messages of support from Gaza

A Boycott, Divestment, Sanctions (BDS) activist and academic from Gaza, who preferred to remain anonymous, said:

The crippling Israeli siege has shattered all spheres of life. This siege is about getting rid of Gazans since most of them are refugees who have not forgotten about their internationally-stipulated right of return. Make their life as harsh as possible so that they either die of starvation and disease, or leave in search of a better life somewhere else. This is why this action is so important since the international community has failed us by doing absolutely nothing. It is left to ordinary people of conscience to help break the siege.

Ahmed Abu Artema, a journalist and activist from Gaza, said:

With the beginning of this new year Gaza has became [an] officially unliveable place according to the UN reports. Israel worked systemically along the last 13 years to undermine the conditions of the life of 2.2 million Palestinians who live in this narrow and besieged place. Gaza needs the efforts of all the people who believe in justice and freedom for everyone to make pressure against the state of Israeli Apartheid to end the policy of the collective punishments against the civilians. We appreciate this action which aim to bring the attention for the people who [suffer] and [struggle]… for freedom.

we urge concerned citizens and businesses around the world to join the overwhelming majority of Palestinian civil society sectors calling on the international community to boycott Israel, divest from it and [impose] sanctions against it until it complies with international law.

We want Gazans to know that we will not give up, that we will continue opposing this illegal and barbaric siege of innocent people