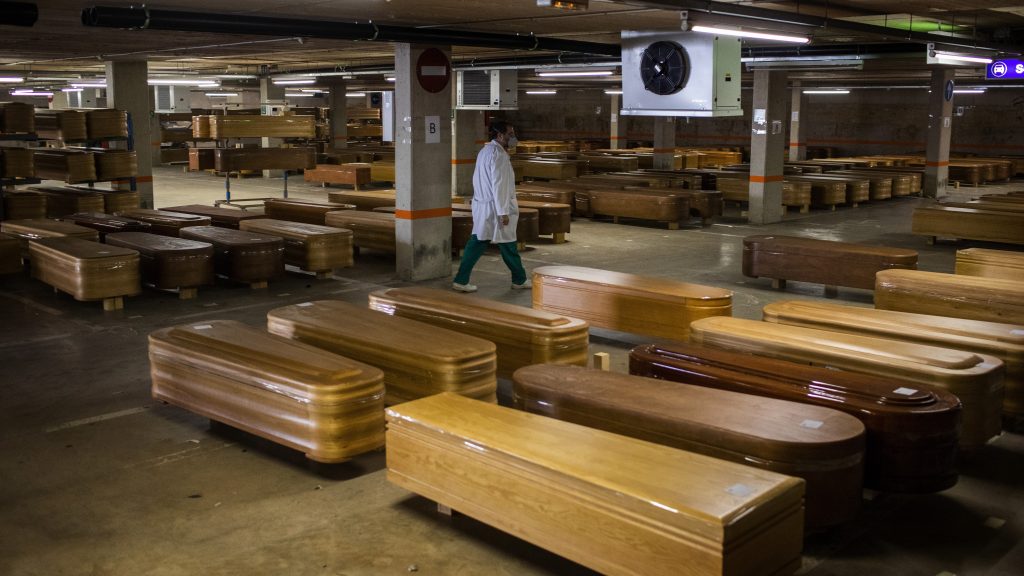 Over 10,000 people in Spain have died after testing positive for coronavirus (Covid-19), as the global number of infections moves closer to a million. Around 50,000 people around the world have died so far during the pandemic. The real figures are believed to be much higher because of testing shortages, differences in counting the dead, and large numbers of mild cases that have gone unreported.

Spain reported a new record in virus-related deaths on Thursday, with 950 in 24 hours although the growth in infections is waning, health ministry data showed. Coronavirus infections rose by nearly 8% overnight to 110,238. The government has acknowledged that the real level of infection could be much higher because Spain only has the capacity of doing between 15,000 to 20,000 tests per day.

In Italy, with the most deaths of any country at around 14,000, mortuaries overflowed with bodies and coffins piled up in churches, although experts drew hope that the spread was already slowing in the country.

In the US, New York is rushing to bring in an army of medical volunteers as the statewide death toll from coronavirus doubled in 72 hours to more than 1,900. As hot spots flared around the US in places like New Orleans and southern California, the nation’s biggest city was the hardest hit of all, with bodies loaded on to refrigerated mortuary trucks outside overwhelmed hospitals. Over 5,000 people had died in the US at the time of writing.

Donald Trump, meanwhile, acknowledged that the federal stockpile of personal protective equipment used by doctors and nurses is nearly depleted.

More than 6.6 million Americans applied for unemployment benefits last week. With a severe recession looming, this figure adds to the 3.3 million applications reported the previous week.

Scientists offered more evidence on Wednesday that the virus can be spread by seemingly healthy people who show no clear symptoms, leading the US government to issue new guidance warning that anyone exposed to the disease can be considered a potential carrier.

Many countries are modelling their response in part after China, which in January closed off an entire province, home to tens of millions of people, in what at the time was an unprecedented lockdown. Beijing says the measures have been a success, with nearly all new cases of the virus imported from abroad.

People in Wuhan, once the epicentre of the crisis, are starting to return to work. They are being tracked by a smartphone app that shows if they are symptom-free. The app is required to board a subway, check into a hotel or just enter the city.

Progress towards a potential vaccine?

Meanwhile, researchers say a fingertip-sized patch could be a potential vaccine for coronavirus. The vaccine is described in a paper published in EBioMedicine, which is published by The Lancet, and is thought to be the first to be reviewed by other scientists.

Researchers at the University of Pittsburgh School of Medicine say they were able to act quickly because they had laid the groundwork during earlier coronavirus epidemics. They have called their drug PittCoVacc, short for Pittsburgh Coronavirus Vaccine, and it uses lab-made pieces of viral protein to build immunity – the same way that current flu jabs work.

The researchers also used a novel approach to deliver the drug, called a microneedle array, to increase potency. This array is a fingertip-sized patch of 400 tiny needles that delivers ‘spike protein’ pieces into the skin, where the immune reaction is strongest. The patch is applied like a plaster and then the needles, which are made entirely of sugar and the protein pieces, simply dissolve into the skin.

Researchers say their system can be mass produced, and once manufactured, the vaccine can sit at room temperature until it is needed, eliminating the need for refrigeration during transport or storage.

The authors are now in the process of applying for an investigational new drug approval from the US Food and Drug Administration in anticipation of starting a phase I human clinical trial in the next few months.