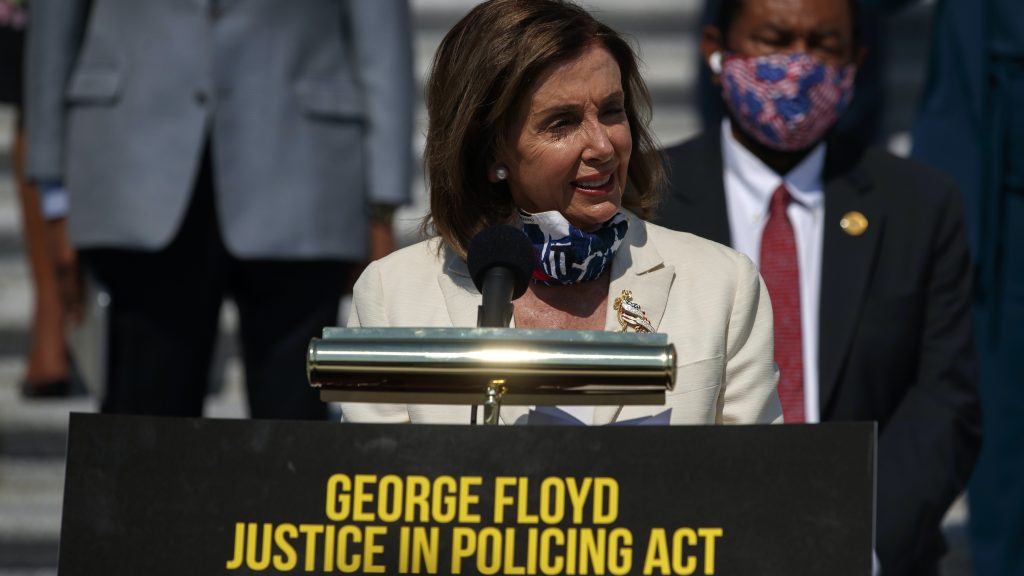 The US House of Representatives has approved a sweeping police reform bill in the wake of protests over the police killing of George Floyd.

The George Floyd Justice in Policing Act passed largely along party lines but stands little chance of becoming law. It requires a majority vote in the Republican-controlled senate.

House Speaker Nancy Pelosi gathered with members of the Congressional Black Caucus on the Capitol steps. She challenged opponents not to allow the deaths of Black Americans to have been in vain or the outpouring of public support for changes to go unmatched. Pelosi said:

Exactly one month ago, George Floyd spoke his final words — ‘I can’t breathe’ — and changed the course of history.

She said the Senate faces a choice “to honour George Floyd’s life or to do nothing”.

On the eve of the vote on 25 June, Donald Trump’s administration said he would veto the bill. Senate majority leader Mitch McConnell has also said it would not pass.

Republicans are proposing their own bill, and Trump said of the Democratic proposal:

If nothing happens with it, it’s one of those things. We have different philosophies.

In the stalemate over the policing overhaul, the parties are settled into their political zones, almost ensuring no legislation will become law. While there may be apparent outrage over Floyd’s killing, politicians remain far apart on the broader debate over racism in policing and other institutions.

Both Democrat and Republican bills share common elements that could be grounds for a compromise. Central to both would be the creation of a national database of use-of-force incidents, which is viewed as a way to provide transparency on officers’ records if they transfer from one agency to another. Both bills would restrict police chokeholds and set up new training procedures, including increasing the use of body cameras.

The Democratic bill goes further, mandating many of those changes, while also revising the federal statute for police misconduct and holding officers personally liable for damages in lawsuits. It would also halt the practice of sending military equipment to local law enforcement agencies.

Neither bill goes as far as activists want, with calls to defund the police becoming central to the Black Lives Matter movement.