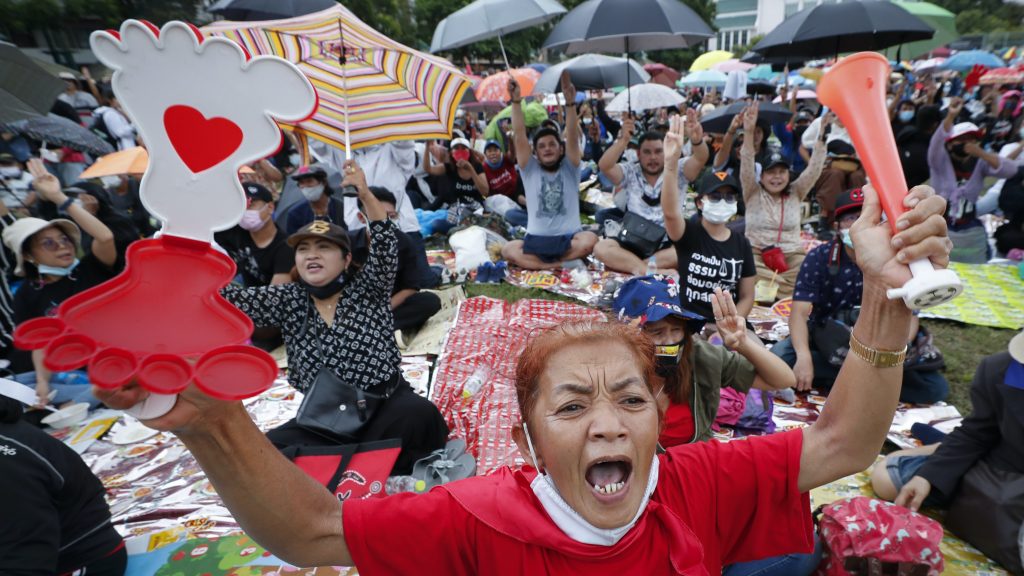 Protesters have gathered in Bangkok for the most ambitious rally so far in a pro-democracy campaign that has shaken the government and Thailand’s conservative establishment.

Organisers predicted as many as 50,000 people will show up and march over two days in an area of the capital historically associated with political protests. An estimated 10,000 people turned out for the last major rally on 16 August. This time, opposition political parties are expected to join and mobilise supporters from other provinces.

Demonstrators ignored a plea from prime minister Prayuth Chan-ocha on 17 September to cancel the event. He said it risked spreading the coronavirus and derailing recovery of the battered economy.

The core demands declared by the protesters in July were the dissolution of parliament with fresh elections, a new constitution, and an end to intimidation of political activists.

They believe Prayuth, who as then-army commander led a 2014 coup toppling an elected government, was returned to power unfairly in last year’s general election, because the laws had been changed to favour a pro-military party. They say that a constitution promulgated under military rule is likewise undemocratic.

The mainly student activists raised the stakes during the 10 August rally by issuing a 10-point manifesto. It called for reforming the monarchy. Their demands seek to limit the king’s powers, establish tighter controls on palace finances, and allow open discussion of the monarchy.

Their boldness was virtually unprecedented, as the monarchy is considered sacrosanct in Thailand, and any criticism is normally kept private. A ‘lese-majeste‘ law calls for a prison sentence of three to 15 years for anyone found guilty of defaming the royal institution.

Kevin Hewison, professor emeritus of the University of North Carolina and veteran Thai studies scholar, said that students are too young to have been caught up in the sometimes violent partisan political battles that roiled Thailand a decade ago. He said that they’ve:

been doing it mostly by themselves, producing some radical demands and refreshingly different protests.

This is why they look and act differently and why they are so confounding for the regime.

What the regime and its supporters see is relatively well-off kids turned against them and this confounds them.

At least 8,000 police are reportedly being deployed for the weekend protest, and prospects for confrontations appear high. Protest organisers have said they will use Thammasat University and the adjacent field, known as Sanam Luang, as the rally venue. However, so far they have been denied permission to do so.

Arrests on charges including sedition for earlier actions have failed to faze the young activists.

They appear fed up with the regime, its tactics of threat and charging, and it is clear that even among the young, they have thought about this and prepared for some of their leaders to be taken away.

Students launched the protest movement in February with rallies at universities around the country. These were in reaction to a court ruling that dissolved the popular Future Forward Party. Moreover, the ruling banned the party’s leaders from political activity for 10 years.

The party won the third-highest number of seats in last year’s general election with an anti-establishment stance that attracted younger voters. And it’s widely seen as being targeted for its popularity and for being critical of the government and the military.

Public protests were suspended in March when Thailand had its first major outbreak of coronavirus and the government declared a state of emergency to cope with the crisis. The emergency decree is still in effect, but critics allege it is being used to curb dissent.