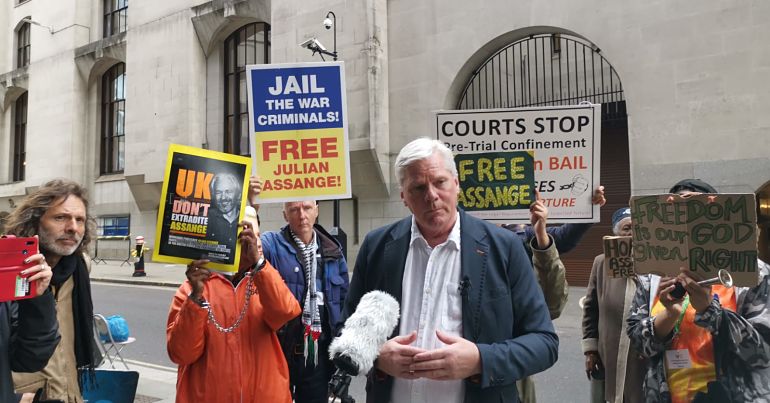 Two witnesses from Spanish private security company UC Global also testified that “discussions were held regarding the possibility of kidnapping or even poisoning Assange” in order to force him to leave the Ecuadorian embassy.

In July 2019, El País revealed that “Julian Assange was spied on 24 hours a day during the time that he spent at the Ecuadorian embassy in London”. UC Global, who reportedly cooperated with US officials, carried out the spying.

At the extradition hearing, an anonymous witness from UC Global told the court:

as a result of the parallel agreement that [UC Global chief] David Morales has signed with U.S. authorities, Morales commented that… reports [on Assange] would also be sent to ‘the dark side’. In order to do this, David Morales began making regular trips to the United States, principally to New York but also Chicago and Washington, he told me he was traveling to talk with ‘our American friends’.

The court also heard that during 2017:

A second witness corroborated UC Global’s ties with the US government, telling the court that Morales “was making regular trips to the United States” and that UC Global staff were being vetted by US intelligence officials.

In light of alleged spying on privileged conversations between Assange and his lawyers, WikiLeaks editor-in-chief Kristinn Hrafnsson told the press outside the Old Bailey:

"To spy on legally privileged conversations between Julian and his lawyers – that alone should suffice to show that this can never be a fair case". pic.twitter.com/R9VnWiided

Former consul to the Ecuadorian embassy in London, Fidel Narvaez, told The Canary:

This invalidates any judicial case, because there is no way that a person who was being spied on in his private conversations with his lawyers – talking about his legal strategies, documentation from the lawyers were stolen, their electronic devices were spied on – there’s no way that Julian Assange is going to have a just case in the United States. So that should be enough reason not to extradite him.

On 30 September, the court also heard witness testimony about US deliberations about “poisoning Mr. Assange”.

According to one witness, the Americans “suggested that more extreme measures” should be used to “put an end to the situation of Assange’s permanence in the embassy”.

These “measures”, the court heard, included leaving the embassy door open to accommodate a potential kidnapping, and the poisoning of Assange in order to force him to leave the embassy.

Obviously, we employees were shocked at these suggestions and commented amongst ourselves that the course that Morales had embarked on was beginning to become dangerous.

The extradition hearing will continue until at least Thursday 1 October.