Greek cops shot a Roma teen and it's led to riots 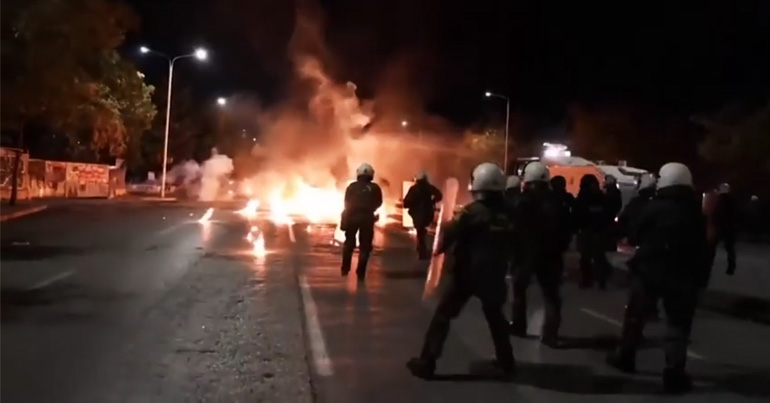 Anger turned into confrontation in Greece on Monday 5 December after police allegedly shot a 16-year-old Roma teen in the head. Police shot the teen after he drove away from a petrol station without paying. The shooting is the latest in a long line of controversial incidents. It comes a year after another Roma youth was killed near the port of Piraeus, also after a police chase.

Fighting in the streets

Members of the Roma teen’s family clashed with police in the second city of Thessaloniki, outside the court where the officer responsible for the shooting was heard. Protesters later on Monday night threw petrol bombs. The 16-year-old-boy remains fighting for his life in hospital.

Protesters hold a banner which reads in Greek "They shot them because they were Roma" as they protest the Police shooting in the head of a 16-year-old youth, after he allegedly failed to pay the 20 euros bill at a gas station.#Athens, #Greece, 5 December 2022.
#16χρονος pic.twitter.com/oMfVJxqymY

Massive resistance on the streets of #Thessaloniki tonight as Greek cops shoot 16 year old in the head. Victim critical. Cops attacking protesters. Cops don't protect us. We need protection from them. Fck the police. #antireport #ACABpic.twitter.com/EQUeipXFCn

The shooting comes as protests will be held in several Greek cities on Tuesday 6 December to mark the death of another teenager, Alexandros Grigoropoulos. Police shot and killed Alexandros in 2008. And last month, mobile phone footage taken from an Athens balcony showed riot police beating a group of visiting Aris Thessaloniki football fans, apparently without provocation.

The police are simply doing their job.

Of course, there is very significant room for improvement… with more training, transparency and means.

But in September, Greek bar associations complained of a “steady increase in cases of police violence” and said even lawyers were being targeted. The Greek ombudsman’s office – the independent watchdog tasked with defending citizens’ rights – said it had received over 300 new police abuse complaints last year, a 17% increase over 2020. In many cases, the independent authority found that internal police investigations “failed to seek out key witnesses including coroners, and to adequately evaluate medical findings” or other evidence of alleged abuse.

Out of nearly 140 cases of police violence and brutality investigated last year, only 22 ended in sanctions, a report by the ombudsman said.

Greek police did not respond to AFP questions about the issue.

Greece has a terrible history of rights violations

In a case brought before the ombudsman’s office, a man arrested after a 2019 protest said he was taken to a police station “bruised and limping”. The man said riot police had earlier kicked and beaten him with truncheons, stripped him to his underwear, and bashed his head against a wall.

Police in Greece have long struggled to live down their role in the country’s seven-year dictatorship, particularly their part in the brutal 1973 crackdown against students in Athens in which more than 20 people died.

Ioannis Ktistakis, a Greek judge at the European Court of Human Rights, told parliament in March that Greece has been hit with nearly 950 rights-related convictions at the court over the last 30 years. Last year it was found guilty 13 times, one of the highest rates in the EU.