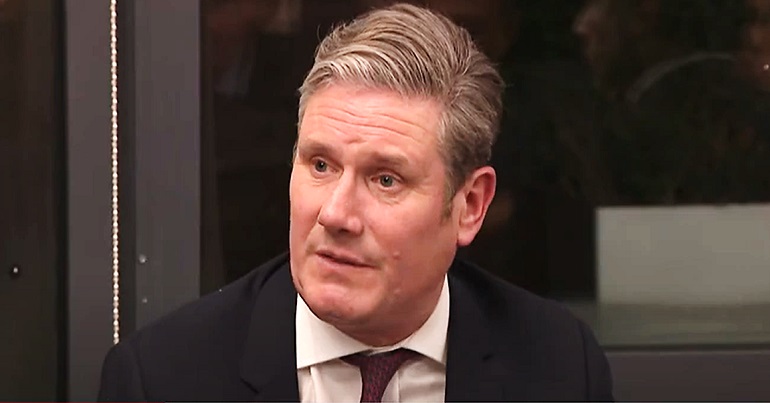 As the Independent reported, the government is rolling out an expanded programme of electronically tagging refugees and asylum seekers – much like the state does to some people it formerly incarcerated. Asked on Sky News on Monday 5 December whether he supported the policy, Starmer said:

I think there’s a case for tagging in particular cases.

The Labour leader then droned on with the usual soundbites about busting criminal gangs and processing people’s claims quicker. However, none of this distracted from his support for tagging refugees. Little wonder he supports it, really, as the Independent noted:

The policy of using electronic tags to track asylum seekers was first introduced in the UK by the last Labour government, whose 2004 Asylum and Immigration Bill included provisions to allow the tags to be used on people released from immigration detention.

So the Tories are now simply expanding on a Labour policy. Plus, Starmer has form on racist rhetoric of late.

As the Canary previously reported, Starmer said in a speech on 22 November that:

our common goal must be to help the British economy off its immigration dependency. To start investing more in training up workers who are already here.

Starmer may as well have said ‘those bloody foreigners coming over here and taking our jobs’, because his inference was fairly clear. That, of course, came after he had previously said similar – but specifically about NHS workers.

When Nigel Farage is praising you, that really should be a red flag. People on social media noted it as such. Scottish National Party (SNP) MP Anum Qaisar slammed the Labour leader:

As a former human rights lawyer, Keir Starmer should know better to use such cruel language about people who are seeking refuge across the four nations.

Someone else also reminded us that Starmer allegedly used to be a human rights lawyer:

Personal opinions aside, this is disgustingly divisive, right-wing, dog-whistle rhetoric. Whether you sit on the left or centre of politics, this pandering to the UK's racists should worry us all. Let's not forget, Starmer is a former human rights lawyer.https://t.co/CfVs4bawoN

And as another Twitter user pointed out, maybe it’s not refugees the government should be tagging:

79% of UK based refugees are fleeing wars we started.

How about we electronically tag the MPs who voted for the illegal wars that create refugees?

Meanwhile, advocacy director at the Joint Committee for the Welfare of Immigrants Zehrah Hasan told the Independent:

Like all of us, people seeking safety here deserve to be treated with respect and dignity. As a former human rights lawyer Keir Starmer should recognise this, so it’s disappointing to see him backing the cruel and draconian use of tagging for people seeking refuge. We know that these tags violate people’s basic right to privacy and have devastating effects on people’s mental health. There is also no evidence base for these intrusive measures as almost no one vanishes from the asylum system.

Are Starmer’s words disappointing? If you were being polite and generous, then yes. However, his rhetoric is not surprising. The Labour leader has trashed the party, and he now assists the Tories in further fomenting already entrenched racism and prejudice in the UK. He, and his supporters, should be ashamed.