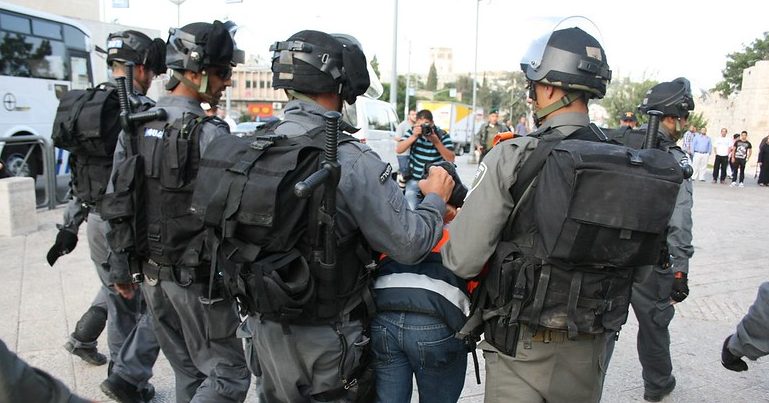 Content warning: This piece contains graphic accounts of violence that some may find distressing.

Adalah claims that bystanders, children, and lawyers were among those arrested across 10 days of protests in May 2021.

According to Adalah, Palestinian citizens were detained, led to the “torture room,” and terrorised:

Israeli “police officers led the detainees to a room located on the left side of the entrance corridor to the station, forcing them to sit on the floor handcuffed, to lower their heads towards the floor, and began to beat them on all parts of their bodies, using kicks and clubs, slamming their heads against walls or doors, and more. Officers wounded the detainees, terrorised them, and whomever dared to lift his head upwards risked more beatings by officers. According to affidavits, the floor of the room was covered in blood from the beatings.”

Adalah lawyers Nareman Shehadeh-Zoabi and Wesam Sharaf have stated that Palestinian citizens were grabbed off the streets:

Nareman Shehadeh-Zoabi and Wesam Sharaf highlighted brutal, overt Israeli police violence in Nazareth in breach of the rights of Palestinian citizens. (Citizens were) grabbed off the street and held in the station (violating rights) including the rights to liberty, dignity and bodily integrity, as well as the right to counsel and due process.

The testimonies given by lawyers claim that they were also attacked by Israeli police. The lawyers who were there to provide legal aid to Palestinian detainees were forcibly removed and had their phones taken.

Two of the affidavits give detailed accounts of the violence citizens were subjected to. Faiz Zbedeiat and Omaiyer Lawabne provided statements to Adalah after they sustained serious injuries while in police custody. Their graphic accounts state that they were both detained, beaten, and witnessed masked officers torturing detainees.

Faiz Zbedeiat is a university student who claims he was standing 6-7 metres away from protesters. He claims he was approached by a police officer, beaten, and forcibly detained:

The cops dragged me, grabbing me by the head and forcing me to look down. I was taken to the police station a few minutes’ walk away. On the way to station, the same cops continued beating me even though I wasn’t resisting at all. On the way, we met a policeman who appeared to be an officer, and he started laughing and said to them: “Did you only arrest him? That’s not enough. We need more.”

[In the Nazareth police station], police brought more detainees into the room, some of them minors who were nevertheless held together with us rather than being separated. At this point, the cops started beating us and kicking us with their feet and batons. [My friend] who was next to me, received a blow that caused a head wound which began to bleed. The blood could be seen on the floor. I told him he should ask for immediate medical attention, but he was afraid that if he asked for help they would beat him again.

The cops kept saying “Close the door.” No one was allowed to raise their head; whomever raised his head or spoke was beaten more. I saw one guy who had a broken nose, his face covered in blood, and yet they kept hitting him inside the room. One of the police officers had an M-16 rifle and I saw that he used it to hit detainees. There was a moment when I could take a glance back and see that a police officer who was beating the detainees was masked.

Omaiyer Lawabne was also detained by police. He claims he was “away from the demonstration.” Omiayer was approached by police at an ATM on Eid al-Fitr. He later sustained head injuries while in custody at Nazareth police station. His injuries were so severe paramedics were called to the scene.

Omaiyer told Adalah lawyers that he thought he was going to die:

I covered my face while begging the cops who surrounded me to release me because I hadn’t done anything. Suddenly, one of the cops started kicking me in the face and head, stepping with his boot on my head and then on my shoulder. Several cops gathered around me as I lay on the ground. They began to hit me, both kicking and punching. I felt intense pain all over my body, from my head to my legs. One of them started kicking me in the artery behind the ear. At that moment, I thought I was going to die.

The United Nations special rapporteur on minority issues Fernand de Varennes released a statement in which he said:

Reports of extreme right-wing violence and disproportional use of force by law enforcement officials during protests in recent weeks, including in Sheikh Jarrah, Damascus Gate and the Al-Aqsa mosque, have led to some of the worst cases of violence against Palestinian citizens of Israel.

Why are such tactics used?

Israel has continuously failed to pass domestic legislation prohibiting torture and as a result it remains legal in cases of “necessity”.

Thousands of Palestinians remain in Israeli prisons. Hundreds of them under “administrative measures” – meaning without charge or trial.

Not only have many been subjected to cruelty and torture during their arrest and interrogation, Israeli security services operate under cover of law by applying legally sanctioned “moderate physical pressure” under “exceptional circumstances.”

Since circumstances are always exceptional and “moderate physical pressure” is left open to interpretation, torture and degradation are commonplace. In that regard, Israeli practices are aligned with CIA black sites and Guantanamo.

Adalah has called the ill-treatment of detainees torture and has called for an immediate criminal investigation to be launched against the Nazareth police department.

What happened inside the police station in Nazareth amounts to torture and ill-treatment, and requires the immediate opening of a criminal investigation to examine the circumstances and conditions of the protesters’ detention at the station – including the investigation and prosecution of police officers involved in the violence

While protests in Nazareth have stopped for the time being, reports of alleged torture continue to flood in. The repression of Palestinian citizens of Israel continues to echo throughout the country.

You can stay up to date with this series by bookmarking our #ResistBigBrother series, or find our latest investigations here.