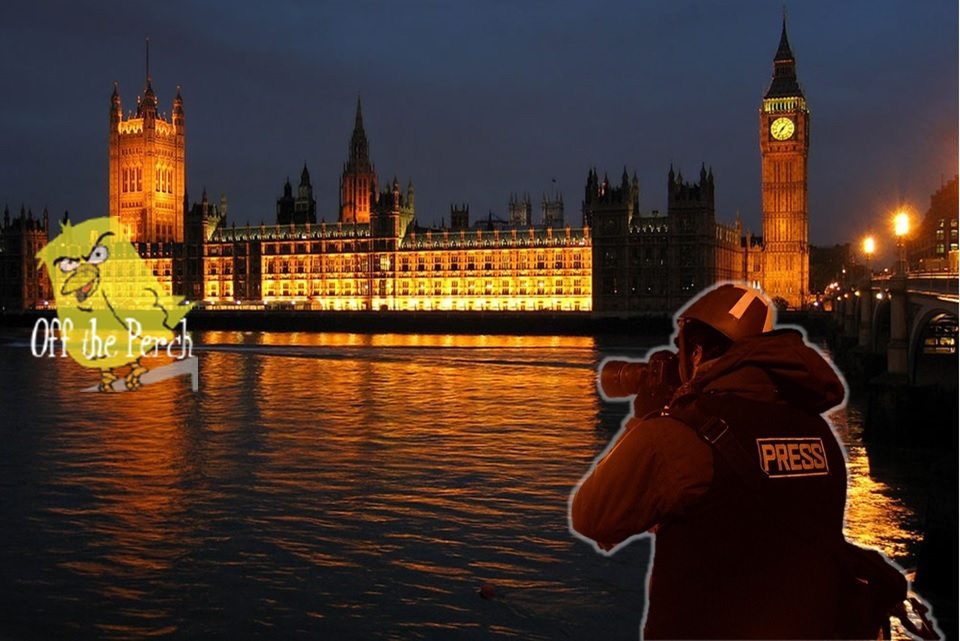 Off the Perch has been required, under a new government wheeze, to employ at least one right-wing writer. So we’re proud to welcome our new commentator, Frank Lee-Bull, with an intrepid piece of frontline reporting from the brutal warzone that is modern British politics.

Hanging on by the skin of its globally-renowned teeth, British democracy and the popular rule of the Conservative party are currently under threat of extinction. And the political poachers responsible for this crime against humanity are a rogue band of rebellious trouble-makers known as Corbynists – sometimes referred to by the loony left as ‘concerned citizens’.

To learn more about these societal misfits and cerebrally-challenged conspiracy theorists, I went along to one of their most recent riots. My aim? To learn more about their vicious assault on all things moderate in this green and pleasant home of the blondest foreign secretary in recorded history.

What I found shocked me to the very core of my faithfully patriotic bones!

I first spoke to Lucy, a 17-year-old extremist who was clearly well-versed in the subversive texts of nineteenth century philosophers. My question? Why were she and her far-left friends so hell-bent on overthrowing the overachieving and overwhelmingly-democratic government of this fair country? Her answer betrayed the dangerously radical sentiment common among many of the youngsters present at this most recent brutish expression of lefty lawlessness:

We just want a future, you know? I’m from a really bad area, but I did alright at school. I don’t wanna go to uni, though, ‘cos I don’t wanna end up with tens of thousands of pounds of debt hanging over my head like my cousin does. But at the same time, you know, there’s no way I can move out of my parents’ house and start a life of my own on minimum wage. House prices and private rents are just stupidly expensive! Honestly, I feel stuck. And that’s a horrible place to be.

Lucy was clearly a lost cause, and had obviously been misinformed by the slanderous lies spoon-fed to her by the loony left media. She should trust politicians more. Taxes, public services, public assets, and millionaires are all perfectly safe in their hands. Nothing at all for her and her impressionable young friends to worry about.

Another rabble-rouser I spoke to was Geoff, a 45-year-old construction worker whose words and beard betrayed his clear admiration for dead Marxists:

I’m pissed off, to be honest. I voted Leave in’t’referendum to give ’em all a kick up the arse ‘cos Tories are just messing up our public services. You know what I mean? On top of this, my kids are gonna need so much training if they wanna get decent pay in’t’future. How about we stop sending troops overseas, stop paying for pointless nuclear weapons, and put money into’t’education system? I reckon Corbyn would listen to professionals, where Tories don’t.

In other words, Geoff and his extremist Corbynist friends were not at all interested in truth or facts. The truth, as we good law-abiding democracy-lovers know, is that the voices of brave pro-war, pro-austerity moderates are being drowned out by the aggressive pacifist and pro-investment nonsense of the far left.

And we should be concerned, because the country is being taken over by these people, who embrace this world of make believe in which working people are struggling and suffering while economic elites are getting richer and richer. They need to wake up to reality and start listening to the reliably unbiased folk in the mainstream media who work jolly hard to bring people the facts – nothing more, nothing less.

Finally, I spoke to Doris, who was a perfect case of the conspiracy-driven fact-hating mentioned above. A 70-year-old former health worker, she told me:

I’m so incredibly proud of the NHS. It’s one of Britain’s biggest achievements, and it has the potential to be even better. It really worries me that future generations may not benefit like I have from this system. If we’re going to stay on our feet as a society, we need to always prioritise the emotional, psychological and physical wellbeing of all our citizens.

But in my lifetime, I’ve seen suffering increase whenever the Tories are in power. They just ignore us. Whether we’re health professionals, teachers, or otherwise. I genuinely think they believe a private education and a privileged upbringing gives them expertise in everything and some sort of right to govern. In my opinion, professionals should always be in charge. Not politicians. And not companies. Professionals.

Doris, Geoff, and Lucy all left me deeply disturbed and in a state of shock. I felt extremely unsafe around these modern-day Guy Fawkes and Oliver Cromwells. What will they take first? My queen? My house? My freedom? My car? My democracy? My Swiss bank account? Who knows?

But their words proved to me that they are dangerous communist agitators. Without a doubt. And they aren’t the only ones. Teachers, health workers, and other so-called professionals are all dead set on destabilising Britain by refusing to accept the government’s wealth of wisdom. Unless we can get the genuine truth, the factual information, and the accurate reality through to them somehow, I can safely say we are doomed to change.

[Ed’s note: There’ll be more from Frank, unless we can get the locks changed or mess with his password.]