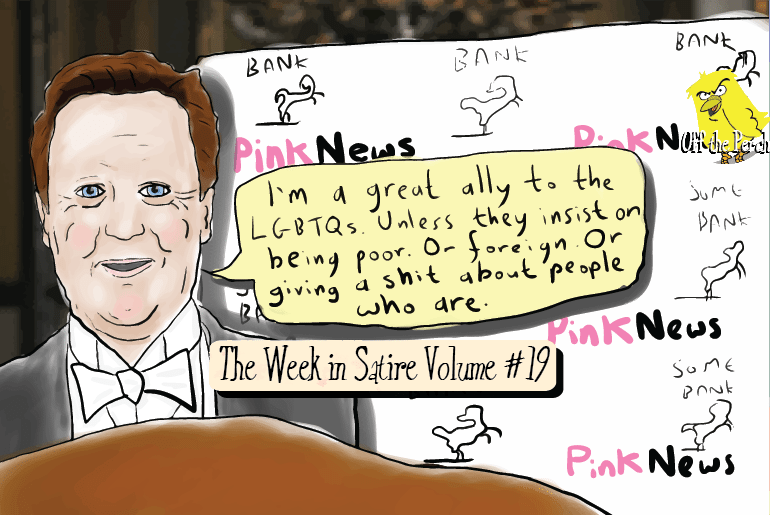 A week in which Pink News made David Cameron the Ally of the Year, in which…

They made David Cameron Ally of the Year?

So they didn’t understand that a PM who’s hostile to his own country’s population isn’t doing LGBTQ people any favours when said population contains LGBTQ people?

Or at least it would have done, were it not now likely to be underwater and on fire.

Excuse me a minute, I need to go and un-bookmark something.

So what else happened this week? 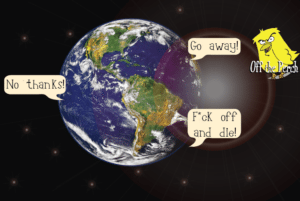 Earth voted the least hospitable planet in the solar system

Following a selection process so elaborate that it makes the Nobel Prize for Literature look like it’s handed out to people the judges just fancy meeting, NASA has announced the updated list of our solar system’s most hospitable planets.

Earth had previously topped the table, but 2016 saw our rating drop faster than a Vote Leave promise on a cartoon anvil. An occurrence which will undoubtedly come as no surprise to anyone who has been awake for the past 12 months.

To find out more, we spoke to Carmella Spacewoman, one of the boffins behind the report:

To be honest, if it wasn’t for David Bowie, Prince, and Terry Wogan still being alive, Earth’s reputation would have plummeted years ago. Things were awful, but at least you knew that the big-three were still out there – being weird, doing perverse things to guitars, and spouting irreverent observations about one-man death metal bands from Scandinavia.

The point is that on any other planet, you would at least be killed quickly. On Earth, however, the inhospitable elements will make sure that you rack up a load of debt first. They’ll also make sure you’re divided from your fellow human beings over issues that they themselves are responsible for. They’ll even charge you to read why it’s your fault in their newspapers! 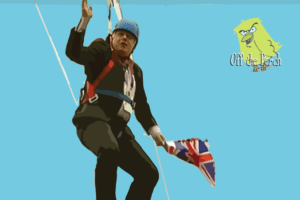 In a crowd-pleasing speech when he was elected as MP for Uxbridge, Johnson restated his opposition to the nearby airport getting any bigger. Going beyond the usual cautious rhetoric of politicians, he said he would lie down “in front of those bulldozers and stop the building, stop the construction of that third runway”. Stirring stuff. In fact, some people are already queueing up to watch Boris in action.

But Off The Perch understands that Johnson’s plans are going to require a bit of a tweak. The government’s headmistress, Theresa May, has put together a complex set of rules for ministerial behaviour on the Heathrow question. The limitations will allow Johnson to describe the new runway as “jolly rotten”, but will prevent him lying down on it. 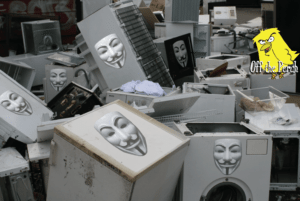 When hacktivists disabled large swathes of the internet last week, they did so by using the inherent insecurities that exist in wifi-enabled smart-showers, tech-toasters, and iFridges.

The explanation for this phenomenon is that these smart-yet-stupid devices are incredibly easy to hack. Hackers can use this insecurity to create botnets. A botnet is a set of simple and interconnected machines which are largely dormant but can be brought into action at a moment’s notice (much like the current Manchester United squad). These botnets can then disable websites via a Distributed Denial of Service (DDoS) attack, which involves sending more traffic at a server than it can process. So in layman’s terms, it’s like driving an elephant momentarily insane by covering it in angry termites.

Of course, this was far too complicated to understand for Fox News anchor Hoagie Skunkgristle, which was why he started sweating and pulling at his collar when all of this was explained to him by an expert.

This was Fox News a few minutes ago, trying to explain a DDoS attack to their viewers. I am laughing so hard. pic.twitter.com/at7128LxR7

It’s also why he turned to face the expert and asked:

Are you telling me that my trouser press is trying to take over the world? 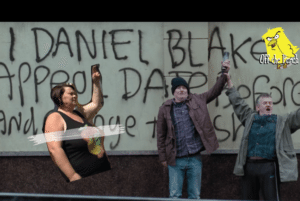 The Daily Mail pasted White Dee pics into a print of ‘I, Daniel Blake’

When failed human being Toby Young delivered a critique of Ken Loach’s new film, most people struggled to read past this statement:

I’m no expert on the welfare system, but several aspects of I, Daniel Blake don’t ring true.

Because if he had even a passing interest (or had listened to one of the many people who have dealt with this crooked system), he might have realised that I, Daniel Blake is a somewhat tame account. Especially when you consider that PEOPLE ARE BEING FOUND FIT FOR WORK MERE HOURS BEFORE DYING OF A TERMINAL F*CKING ILLNESS.

Of course, many found it strange to hear The Daily Mail bemoaning a lack of balance – The Daily Mail being the mid-market tabloid horror-rag that has previously supported such non-moderate propositions as:

The Daily Mail decided to live up to its newfound dedication to balance by sending Toby Young to glue cut-out pictures of Benefits Street‘s White Dee into prints of I, Daniel Blake. Just inserting her image into the movie wasn’t enough, however, which is why the self-styled “toadmeister” stood in the projection room shouting the sort of things that he thinks us poor people* shout – including:

I’m a subhuman layabout who deserves everything I get. Innit! 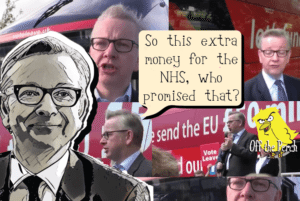 Gove to question gov. about promises made by Gove

Michael Gove – the man who spearheaded a Brexit campaign so non-factual that it made Donald Trump look like Mr Spock – has been selected to join a committee that will scrutinise the government’s strategy for Brexit.

Despite all of the lies that he told. Despite the way that he used the future of this country as a means to further his own career. Despite being such a blatant puppet of Murdoch that you can see the mogul’s fingers whenever Gove opens his mouth to lie.

And Off The Perch has been able to procure a transcript of the first exchange between Gove and his good buddy Boris Johnson:

MG:  Ah yes, I suppose you’ll be busy working out how to spend the additional £350m that you promised to the NHS?

MG:  Surely you do know, Boris, because you promised. Look – here’s a picture of you in front of a bus that says so. 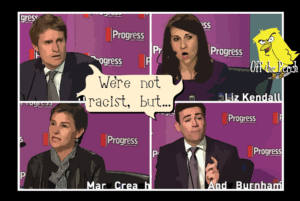 There was a motion in parliament the other day on whether or not the UK should stop supporting Saudi Arabia’s offensive in Yemen. In particular, this vote centred on whether or not we should stop selling them weapons. Especially as Yemen is descending into famine. And the conflict has quadrupled al-Qaeda terror. And Saudi Arabia is using illegal weapons that they bought from us at some point. And they’re committing war crimes. All of which we’re whitewashing to sell them more weapons.

Facts which have undoubtedly left you thinking:

Good lord, that sounds f*cking horrible. Well obviously we shouldn’t be selling them weapons. In fact, if they weren’t so eager to buy things from us, they’d probably be the sort of country that we launched an ill-thought-out military quagmire against!

What you may not realise, however, is that the motion was tabled by the terrorist-sympathising hate-wanker, Jeremy Corbyn! And so obviously the progressive forces of moderate politics had to group together to ensure that the Conservatives were able to carry on dealing death to their murderous, war-bastard buddies.