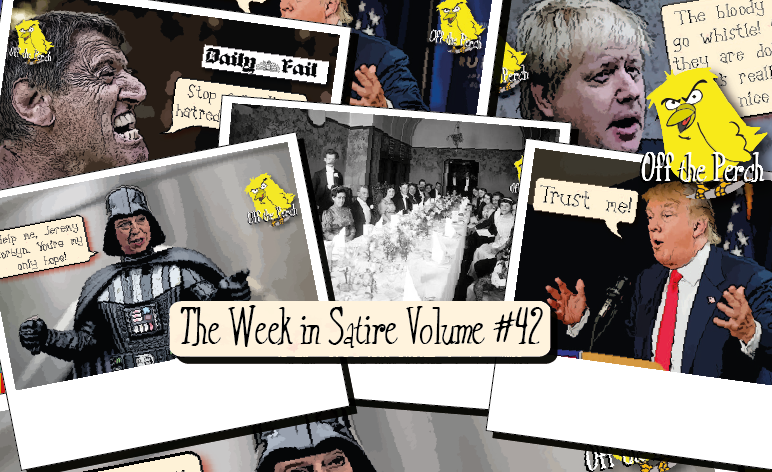 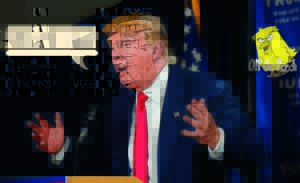 There’s been some worry about whether Brexit will be a success. Especially as it transpired that when Boris Johnson said he wanted to ‘have his cake and eat it’, it turned out that the ‘the cake’ was us. A cake which Boris ultimately ended up falling face-first into. Like a hapless ex-clown accidentally cream-pieing himself in the face at a serious job interview.

But despite all that, it now turns out that Brexit will be a great success!

Because our brave leader, Theresa May, has managed to secure a verbal contract with the world’s most reliable man.

And that man, of course, is none other than Donald Trump. 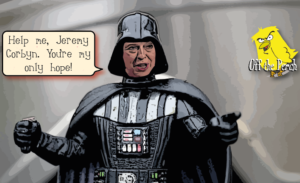 Against all the odds, Jeremy Corbyn’s plucky Rebel Alliance managed to blow up Darth May’s Death Star earlier this summer. And although the Empire was left intact, it was still a massive blow. Especially as the Death Star was supposed to blow things up – not get blown up itself! A Death Star which no one forced the Empire to build in the first place.

But Darth May has come up with an unusual plan to make up for the loss of her primo space weapon. A plan which we should all have a bad feeling about.

Corbyn was practicing his lightsaber skills one day when his trusty droids, C3-PLP and R2-John McDonnell, brought him a holographic message from Darth May:

It’s come to our attention that, actually, your lot are quite popular. As such, we were wondering if you’d give us a bit of credibility and help us run the Empire?

Obviously, we still want to rule with an iron fist, but we’re thinking that if we use your hand instead of ours, then people might think you’re a load of nerf-herders too. Just like we did with the Liberal Wookiecrats.

‘She just forgot you can’t say racist stuff in pub 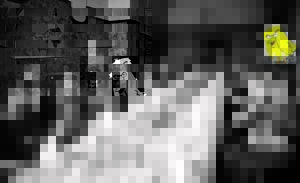 When Tory MP Anne Marie Morris used the phrase ‘n****r in the woodpile’, most people thought:

Well, that’s that bastard gone. What a bastard.

It later turned out that the phrase had merely slipped out of her mouth, though. As hardcore racial slurs apparently do for some people. You know, when they forget what they can or can’t say in public. 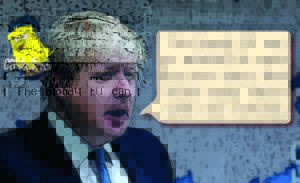 When Boris Johnson said the EU can “go whistle” over the Brexit ‘divorce bill’, most people thought:

Oh look – there’s Boris Johnson – saying things again. Just like when he said all that other stuff that he never stuck to; or – let’s be honest – never really believed in the first place.

Like most things that Johnson says, though, his comments have come back to bite him on the arse.

It’s important to remember that the EU negotiating team is made up of highly trained negotiators. The UK team, meanwhile, is made up of some guys that Dave Davis found at a bus station.

Saying the EU “should whistle” probably sounds quite funny to the sort of people who still find Boris amusing. And yet, it seems like the EU may do just that.

We spoke to the EU’s lead negotiator to find out more:

Of course, every EU negotiator is trained in the important cultural, physical, and mental fields. I myself am a black belt in karate, a Michelin starred chef, and one of only three people in the world who can rap the theory of general relativity. And, of course, I am an excellent whistler. 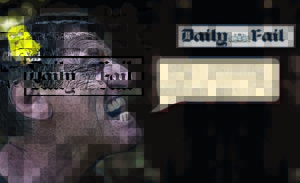 And yet that abuse is there. Coming in from all sides. Invading public discourse like black mould seeping into a poorly maintained bedsit.

A source speaking out on behalf of the abused, though, is actually one of the UK’s most prominent serial abusers. Said abuser, of course, being The Daily Mail. An abuser that I will now lightly abuse myself. Albeit in a classy way. Using things like satire and irony – as opposed to the more straightforward language that’s used in the Mail Online’s comment section:

STORM IN A WOODPILE: Fury as Tory MP is subjected to PC outrage for using a common term that most people say all the time, apparently. pic.twitter.com/O2Gl177wrv