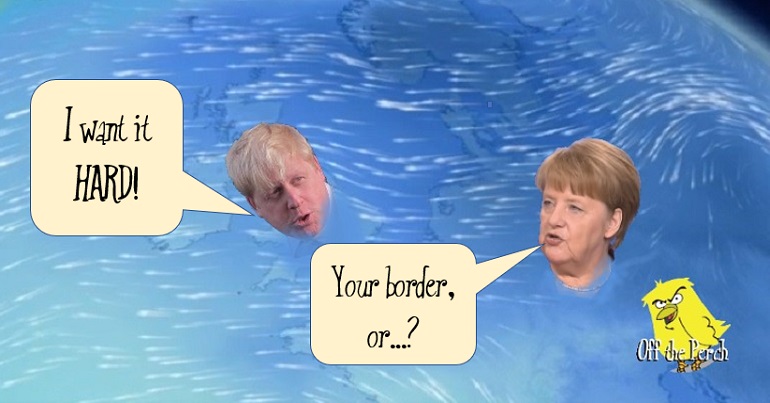 A leaked letter from foreign secretary Boris Johnson has laid the blame for the UK’s extreme weather on “Brussels bureaucrats meddling in the democratically elected, sovereign jet stream”. But the memo, seen by Off The Perch, is at odds with the official government line. A line which blames Russian Twitter bots exerting influence over a large area of high pressure.

The ‘Ogre from Moldova’

The current UK cold snap, affectionately called ‘The Ogre from Moldova’, has seen temperatures plummet to ‘put-another-pound-in-the-gas-meter’ degrees celsius. Across the UK, mammas had to buy additional pyjamas for the school run, foxhunts were cancelled, and the Southern Rail service from Brighton to London Euston ran out of tea in all first class carriages. The country’s official meteorological website, dontblameusblamethecomputermodelling.co.uk warned of a:

But wading into the mass hysteria and record-breaking levels of dogs-in-snow selfies, Johnson hit back at the EU.

The leaked letter, written by Johnson to Theresa May, was passed to Off The Perch by a disgruntled Polish cleaner at the Department for Bringing Back 19th-century Colonialism (BBC) (not to be confused with the BBC (even though the similarities are striking)). In it, Johnson ranted:

When we met on 7 February, I offered to send you a paper setting out how I believed the threat from European extreme weather permeating our soft border could be managed on the basis of a highly facilitated solution. And a wall extending down the North Sea and into the English Channel.

WELL, you fucking ignored me, didn’t you? And now? And now, THIS.

I warned you what would happen when you give those fuckers in Brussels an inch.

And NOW LOOK what’s happened. Brussels told the jet stream that tariffs of around 30% would remain while it stayed in its current position. And now, we’re FUCKED. Record numbers of accidents on my bike in central London. Estate managers unable to host the finale of the hare coursing season. Farage’s light aircraft grounded at Farnborough Airport. TAKE BACK CONTROL?

As part of the ongoing inquiry into Russian state actors’ disruptive behaviour on foreign issues, we are currently looking at the possibility that Kremlin-authorised Twitter bots flooded the hashtags #Snowmageddon, #LondonSnow #Weather and #MakeAFilmWintry, therefore causing a large area of high pressure over the Nordic block to sink south, resulting in the extreme weather conditions we currently have.

BBC Weather took a broadly impartial stance on the Orge from Moldova, laying the blame at the door of both Europe and Russia:

A homeless person for whom Off The Perch bought 20 JPS superkings said of the weather:

I heard it was to do with a heatwave in the Arctic causing record breaking temperature, which in turn experts think was probably due to man-made climate change. My homeless mate Bob thought the same. But he died last night because the police took his tent away. Otherwise, y’know – he would’ve told you himself.

May has reportedly told Johnson to “go fuck himself or start dealing with the important shit”. Which for the Conservative government probably means National Book Day on Thursday 1 March.