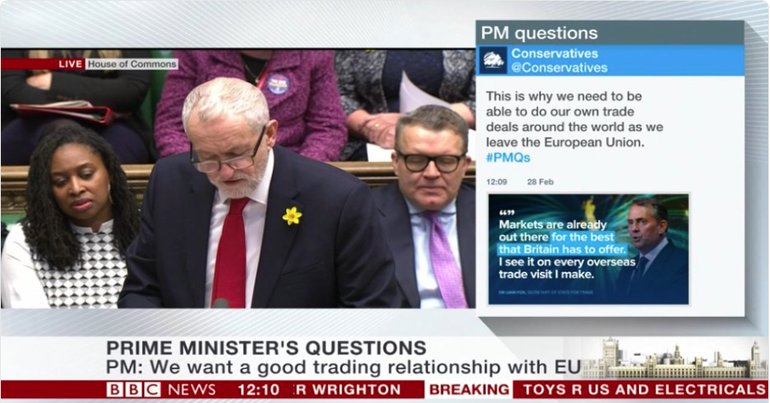 According to most commentators, Labour leader Jeremy Corbyn made mincemeat of Theresa May at today’s PMQs. This might go some way to explaining the BBC‘s bizarre behaviour during the Labour leader’s time at the despatch box. Viewers noticed that, while Corbyn was speaking, the BBC was playing back tweets from the Conservative Party’s director of communications, without mentioning her day job.

Corbyn bested May on a number of issue during PMQs, but front and centre was Brexit. Here is just one moment from many where the Labour leader ran rings around his opponent.

The Government is so divided, the Prime Minister is incapable of delivering a coherent and decisive plan for Brexit. #PMQs pic.twitter.com/VbHOtHJHAQ

From the Westminster press pack to regular tweeters, most viewers agreed this was not a good day for Theresa May or her government.

Laughter on all sides at #PMQs at Corbyn’s jibe against Johnson thinking about Camden-Islington border.Foreign Secretary is a laughing stock

That was fascinating. The Prime Minister was asked the simplest and most un-tricksy of questions by Ian Blackford – does she still regard the four nations of the UK as "equal partners", as she did in 2012? She looked perturbed and very deliberately avoided saying "yes". #PMQs

HA!
Corbyn goes for the JUGULAR #PMQs asks the PM to explain WHAT she MEANS by " ambitious managed divergence*
The PM FAILED to elaborate – resorted to the usual *waffle*

But some viewers watching the BBC‘s coverage of PMQs noticed something odd happening when Corbyn was speaking. The tweets being displayed on the right of the screen weren’t just from journalists and members of the public. One in particular looked very familiar. It came from Carrie Symonds. And Carrie Symonds is the director of communications for the Conservative Party.

Just how biased against Labour is the BBC these days? They're posting tweets from the Tories Director of Communications while Jeremy Corbyn speaks at #PMQs. pic.twitter.com/csSwKN6fMc

Effectively, the BBC was airing Conservative propaganda while the leader of the opposition was at the despatch box. They certainly don’t air the views of Labour’s director of communications Seamus Milne while the prime minister is speaking.

Later, the BBC was even including tweets from the Conservative Party itself:

Not only the Tories head of comms, but the BBC also put up tweets by the Tory Party while Corbyn was speaking #PMQs! Have they ever put up Labour Party tweets while May speaks?
(2/2) pic.twitter.com/7T6qQwMDgC

This is not the first time the BBC has been accused of presenting a partisan actor as a neutral one. Last year, BBC Newsnight featured a segment on the NHS in which cancer specialist Dr Karol Sikora called the health service “the last bastion of communism”. While dissenting views on the NHS are a welcome part of the public health debate, it is important to know the financial interests and background of the speaker. The NHS segment opens with Sikora introduced only by name. There is no mention of his experience or interests.

The BBC failed to mention that Sikora is the medical director of private health firm Proton Partners Ltd, based in the tax haven of the Bahamas. He took part in a series of anti-NHS attack ads for the US Republican Party aimed at killing off President Obama’s healthcare plans. In the videos, it is claimed that NHS rationing boards routinely deny life-saving care to vulnerable British patients. Imperial College London also took legal advice after Sikora made repeated public claims that he holds an honorary professorship at the prestigious institution. He does not. None of this was mentioned before, during or after Sikora’s segment.

And last August, BBC Radio 4 carried out an interview with former Conservative chancellor and renowned climate change sceptic Nigel Lawson. The hosts permitted Lawson, unchallenged, to make false claims to support his position that climate change doesn’t exist. After public complaint, the BBC apologised, and admitted it had breached its own “guidelines on accuracy and impartiality”.

We need an impartial, publicly funded broadcaster. And the BBC has a tough job to find balance amid chaos. But the corporation cannot play fast and loose with its own principles. In doing so, it not only fails the licence fee payer, it fails its own moral test.