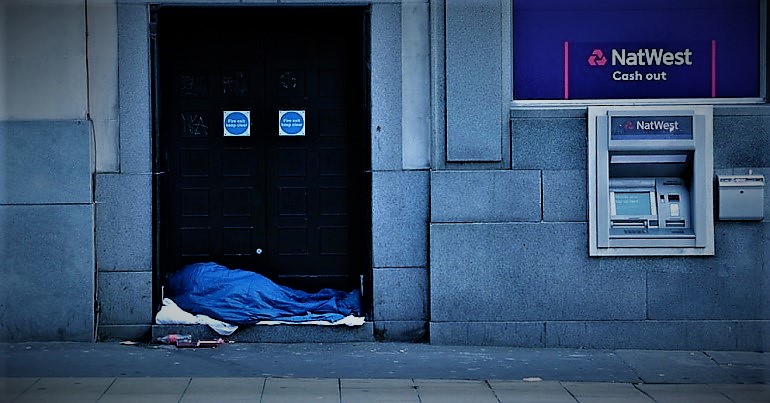 On Tuesday 27 February, police in Croydon reportedly moved a homeless woman onto the streets from a car park corridor where she was sleeping. According to LBC, the woman said the police told her it was because “people pay a lot of money to live in them flats and they don’t really want people… dossing in the corridor”.

“People pay a lot of money”

LBC‘s Rachael Venables spent Tuesday night with homelessness charity Nightwatch in Croydon, Greater London. While she was out with the charity, she met a homeless woman called Jo. She told Venables she had been sleeping in the corridor of the Q car park in the town when three police officers told her to leave. She said:

I was in the corridor of Q car park and three police officers kicked me out.

[They] told me that people pay a lot of money to live in them flats and they don’t really want people, like, just dossing in the corridor.

All I said to them is it’s freezing out there. So they must be nice people. And that was it. I just got up and left. But it just seems like whenever I find places like that, I do get kicked out. It’s too cold at the moment.

Nightwatch told LBC that it tries to get help from the council for homeless people and rough sleepers:

They tried a SNAP [Support Needs and Assessment Placing] team in Croydon and left a message, they tried Streetlink but… all of these things you leave messages. Five to ten years ago, you could ring the council… and they would get somewhere when we had severe weather. People would be put in a B&B; that just doesn’t happen now. You just can’t get through to anybody now to get help.

Whilst it would be wrong to comment on individual cases the issue of begging and rough sleeping is an issue across many areas of the UK. Police and Partners work together to support those sleeping rough whilst balancing the needs of the wider community.

Support is offered by the local authority and many local charities with shelters and rest centres located in Croydon… The local police teams have been conducting patrols looking to signpost any rough sleepers found to agencies who can help them prior to and during this cold weather.

The number of homeless people and rough sleepers has been rising over recent years.

In Croydon, when Venables asked Jo if it was a “matter of life or death” for her, she replied “yes”. Venables said Jo left with “tears pouring down her face”.