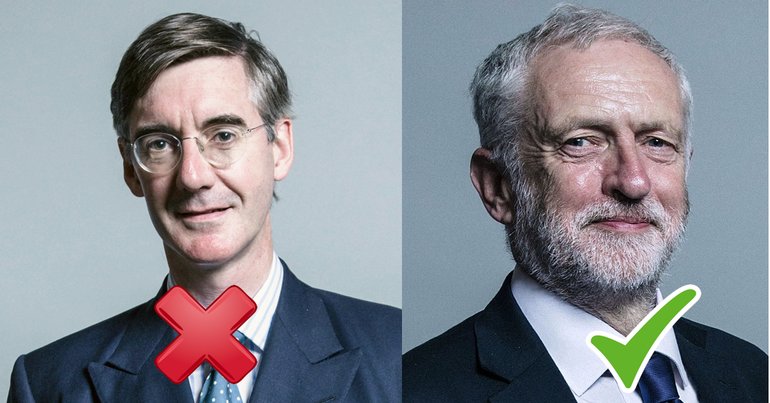 Conservative MP Jacob Rees-Mogg has been been forced to apologise after his latest smear against Jeremy Corbyn was proven false by members of the public.

In a live interview with Channel 4 News this week, Rees-Mogg claimed the Labour leader had voted against the Good Friday Agreement. But parliamentary records prove this claim untrue. Corbyn voted in favour of the Northern Ireland peace agreement.

Not only this, but as author Alex Nunns pointed out, one of the few MPs who did vote against the peace agreement was a close colleague of Rees-Mogg.

Here's @Jacob_Rees_Mogg telling a lie on Channel 4 News. Jeremy Corbyn voted for the Good Friday Agreement. One of the few MPs who did vote against it, however, was Rees-Mogg's hard-Brexit colleague & fellow member of the European Research Group, Desmond Swayne. pic.twitter.com/lm0PKwSLni

Amid growing pressure from the public, Rees-Mogg was forced to issue a retraction on Thursday 1 March.

Mea culpa, I was wrong to say that Mr Corbyn voted against the Good Friday Agreement. He did not.

Of course, as one Twitter user pointed out, this is how fake news works. The audience for Rees-Mogg’s tweet is likely to be considerably smaller than the audience of Channel 4 News.

As with the @NadineDorries tweet earlier, this is how fake news works. Sow a seed, let it spread, then delete/‘apologise’ and you’re in the clear. The fake news spreads regardless…. https://t.co/3VR8MVV42B

Just weeks after Theresa May announced her Orwellian ‘fake news unit’, it is her own party leading the charge against facts. Some recent cases stand out.

Conservative MP and vice chair for youth Ben Bradley claimed Mr Corbyn was a communist spy. A legal challenge by the Labour leader forced Bradley to retract his claim and pay a significant settlement, which Corbyn donated to a local food bank.

Rees-Mogg was also in hot water for claiming hard Brexit was based on a commitment to serving “the poorest in society”. A quick scan of Rees-Mogg’s own voting record puts paid to that theory.

Yes and we all know how much you care about the poorest in society 🙄 pic.twitter.com/sNSKpcaQ1I

And of course, the entire right-wing press and political community must take responsibility for the Corbyn spy smear which intelligence agencies confirm was 100% false.

Conservatives have been front and centre in generating a moral panic over fake news. But ‘fake news’ is nothing but propaganda. It was not invented by the left, or Russia, or the internet. It has been the preserve of politicians and press from all sides of the political spectrum since the earliest days of both. As these cases show, the internet can be just as useful in shutting down ‘fake news’ as it can be in delivering it. Because the internet allows new media organisations, and professional and public fact-checkers, to counter political propaganda from all sides. It also removes the propaganda monopoly from the UK’s billionaire press barons. And this week, it held a Conservative MP to account for saying something untrue to smear a political opponent.