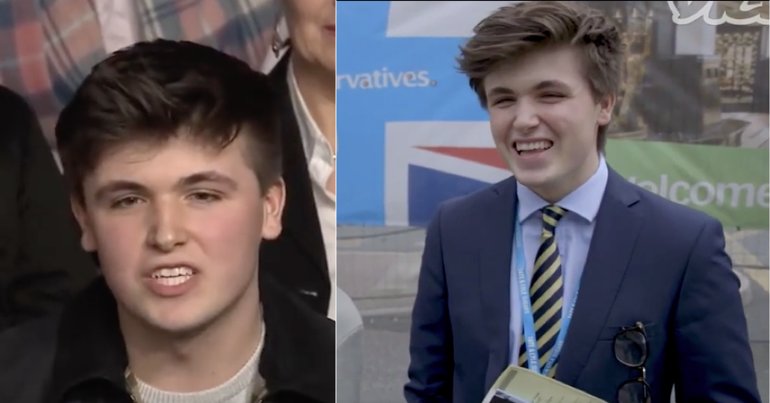 Viewers noticed something familiar about an audience member on BBC Question Time last night. He bears a shocking resemblance to a young Conservative featured in a Vice film about the Tory party conference in Manchester last year.

On last night’s Question Time, a young audience member tore into former Conservative chancellor Ken Clarke. He criticised Clarke for “telling people who voted Leave that they didn’t know what they were voting for”, before challenging a Remain-voting audience member. The video below is set to play from the young man’s interjection into the debate:

Viewers noticed that the audience member bears a remarkable resemblance to an interviewee in a Vice short called Chat Shit Get Elected: Tory Party Conference Special. In it, chief political correspondent Rants N Bants trawled the conference for the most prized specimens of Conservativism and came across the Question Time doppelgänger.

Asked which Conservative MP would have the best drugs, the young man laughed before giving a Boris-Johnson-style response:

Uh, well, I mean, you know… I don’t think there’s much drugs in the Tory party!

Asked who would win in a fight between Theresa May and Jeremy Corbyn, he predicted a May victory, saying:

Jeremy Corbyn, he can’t… you know, steam stickers on a jumper.

And asked if he preferred Theresa May or Jacob Rees-Mogg, the young Conservative backed Mogg. A few months later, it appears the same young man is seated in the Question Time audience. His blue suit and tie ditched in favour of regular person camouflage. And his Boris-Johnson-style poshness dialled down significantly.

Not for the first time

On Thursday 9 November 2017, a member of the BBC Question Time audience said claims that disabled people had died due to Conservative government policy was “inflammatory rubbish”. But it turns out that the man was not particularly unbiased. He was Chris Stevens, a Conservative Party councillor from Horley.

In May of the same year, another Tory councillor was granted a question.

In fact, there have been quite a few.

# And here's allll their friends… # pic.twitter.com/oHsSDggZrP

Worse, last night’s show featured the record-breaking 32nd appearance of former UKIP leader Nigel Farage. Only Ken Clarke has appeared the same number of times, but that was over a longer period of time. According to research by HuffPost UK, UKIP has appeared in a quarter of all Question Time shows since 2010. It found that:

258 regular Question Time shows since May 6 2010 shows the anti-EU party had a representative on 24% of the programmes.

The Greens, who unlike Ukip have had an MP consistently in the last seven years, only appeared on 7% of the shows.

The BBC is right to air the popular anti-EU sentiment that UKIP represent. But granting UKIP and Farage a disproportionately loud voice on shows like Question Time has (also rightly) triggered accusations of helping foster such resentments. Especially when the corporation has simultaneously marginalised pro-EU, liberal voices from the Green Party and others.