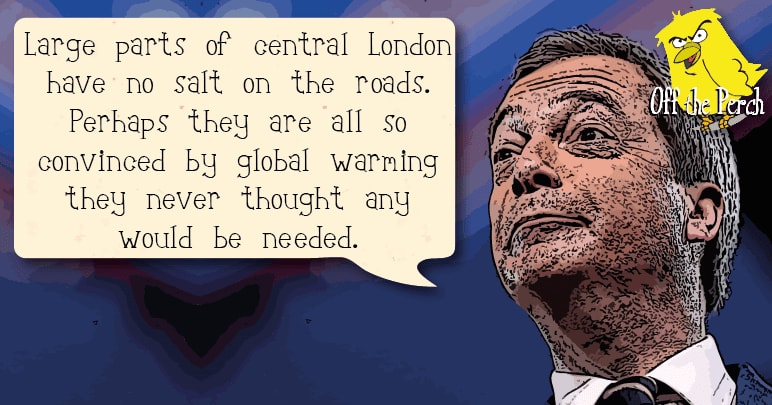 Whenever there’s a bit of cold weather, right-wingers make variations of the same joke:

Large parts of central London have no salt on the roads. Perhaps they are all so convinced by global warming they never thought any would be needed.

It's really cold outside, they are calling it a major freeze, weeks ahead of normal. Man, we could use a big fat dose of global warming!

This year, in a delicious twist of irony, the hot air released by right-wingers was so intense that it reversed a blizzard.

Scientists stopped referring to the climate phenomenon we face as ‘global warming’ because it was confusing to idiots.

“But if the planet is supposed to be getting warmer, how come it’s still proportionately colder in the seasons when our hemisphere is further away from the sun?” the idiots would ask.

As such, the term ‘climate change’ was coined to better represent the outcome – namely that CO2 would lead not only to hotter temperatures but to a greater fluctuation in weather patterns.

The wily idiots got around this by stubbornly continuing to refer to it as ‘global warming’.

As we’ve come to expect now, the coming snow was accompanied by thousands of middle-aged men reciting their global warming joke. The sound of their droning was something like a hair dryer, only more boring.

This year, so many of them droned on that snowmen and women across the country instantly melted.

Speaking on behalf of all the boring, middle-aged men, Nigel Farage said:

No one was able to follow what he said, though. It was just so tedious.