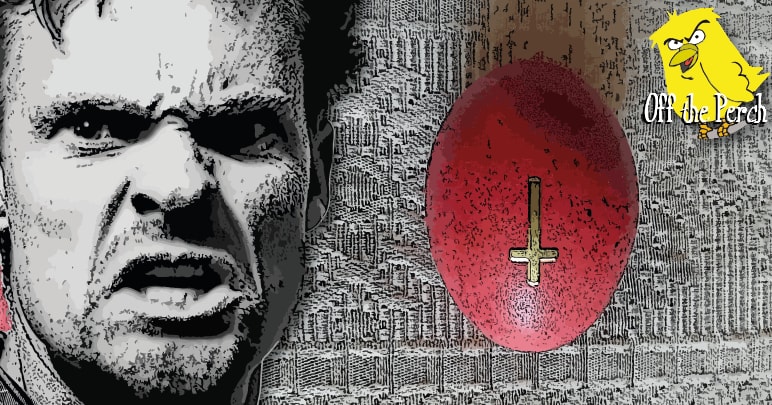 For the past few years, some people have worried that the word ‘Easter’ has been banned from Easter eggs. The problem is that:

OF COURSE THEY’RE FUCKING EASTER EGGS! DO WE REALLY HAVE TO WRITE THE WORD ‘EASTER’ ON EVERY ONE OF THEM? WOULD YOU NOT UNDERSTAND WHAT A CAR WAS IF IT DIDN’T HAVE THE WORD ‘CAR’ WRITTEN ON IT? BUT FUCK IT – HERE YOU GO – HERE’S ALL THE EASTER YOU CAN HANDLE.

It’s a range which is heavy in its use of:

Although this satisfied the sort of people who think that God is cool with you being an arsehole as long as you eat moulded chocolate once a year, there has been an issue. A shop put some eggs on display upside down, making it look like the crosses on them were somewhat satanic.

The interim leader of UKIP, one Arthur Braincell, tweeted:

Sad to see a English firm siding with satan and the paedos at the BBC! [SIC]

To which Cadbury replied:

FUCK OFF! JUST FUCK OFF! IT’S CHEAP CHOCOLATE IN THE SHAPE OF AN EGG THAT WE USE TO GOUGE MONEY FROM PEOPLE AROUND A HOLIDAY OF FORMER SIGNIFICANCE! IF YOU’RE GOING TO BE ANNOYED ABOUT ANYTHING, BE ANNOYED THAT WE USE JESUS’ DEATH AS A MARKETING GIMMICK! BECAUSE THE ONLY THING HE HATED MORE THAN GREED WAS CUNTS LIKE YOU!!!!

It was upside down, sorry.

It’s unclear if this was a shout-out to your boy JC or exasperation.