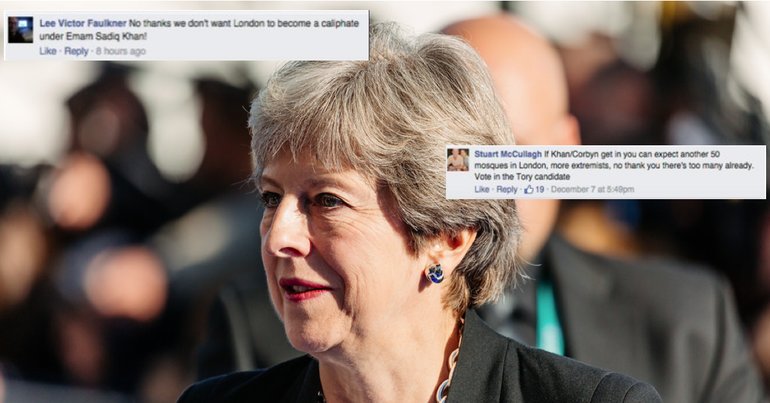 The establishment media is giving over a lot of time to the Labour antisemitism row. This fresh commitment to confronting racism is most welcome, given the near-total free pass given to racism across the media and political spectrum. But if, like Labour, the Tories are now responsible for every utterance of their supporters on social media, they’re screwed.

The racism allegations against Jeremy Corbyn consist overwhelmingly of guilt-by-association. This means that, if some person in a Facebook group he is a member of or of the same general political persuasion does something, he is responsible. Applying that logic, we’d all be racists. But the Tory Party in particular would be in real trouble.

First, let’s look at these comments made by Conservative voters during the London mayoral election in 2016. They didn’t seem to be huge fans of having a Muslim candidate in the race at all. Insults included:

Why on earth would we want a muslim mayor of London?

We don’t want London to become a caliphate under Emam [sic] Sadiq Khan.

Since politicians are all apparently now responsible for racist comments left on their Facebook pages, here's just a small selection of posts left on the Conservatives' Facebook page during their campaign against Sadiq Khan. pic.twitter.com/CWs54Mw0hS

These comments remained on the Conservative Facebook page for some time after the party were alerted to them.

This was not an accident. The campaign by Conservative mayoral candidate Zac Goldsmith placed racism front and centre. Things got so bad, the party’s Muslim peer Baroness Warsi spoke out.

How did the Tories treat Lynton Crosby, the man responsible for this overtly racist campaign? They knighted him, for services to politics.

There are currently 74 antisemitism cases against Labour’s half a million members. Every one of those is a problem. But every one of those problems is being evaluated and, if required, expelled from the party. The same cannot be said of the Conservatives. In fact, it looks like people are rewarded instead.

Boris Johnson was made foreign secretary, despite referring to black people as “piccaninnies” with “watermelon smiles” and referring to former US president Barack Obama as “part-Kenyan” with an “ancestral dislike” of Britain. The BBC treated this as a comic caper, with this listicle of his greatest hits. 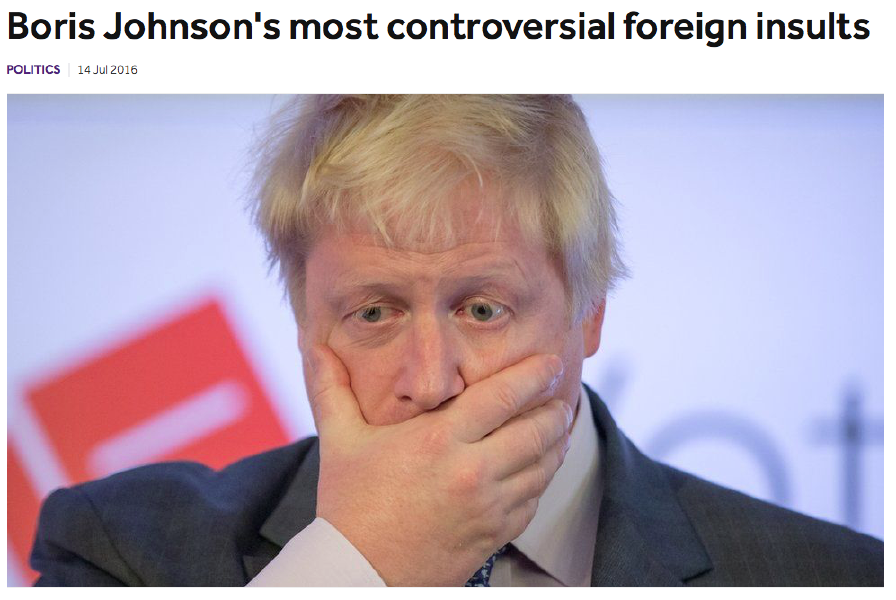 Tory MP Bob Blackman still has his job too, despite sharing a post from an Islamophobic US website entitled: “Muslim Somali sex gang say raping white British children ‘part of their culture’”. Blackman claimed he posted in error, the same claim he made when retweeting far-right thug Tommy Robinson in 2016.

Tory MP Anne Marie Morris, meanwhile, used the word “n*gger” at a public meeting. After a brief suspension, she was allowed back to business as usual.

And this goes all the way to the top. Theresa May was made prime minister even after the racist ‘Go Home‘ van debacle.

Theresa May has the gall to make snide remarks about Corbyn using 'populist' policies – I think the hypocrite who introduced the vile immigrants go home van is confusing her populist policies with Corbyn's popular ones #theresa_may #Hepworthclare pic.twitter.com/fkMug3hAN4

The left should continue to call out all forms of prejudice when it sees them. And it should do so whatever the political affiliations of the source. The good news is, on the whole, that’s exactly what the left does. But thanks to the Anyone But Corbyn (ABC) brigade – a toxic coalition of the Labour right, the right, and the far right – a new narrative is being spun. Left-wingers have gone from ‘politically correct snowflakes’ to (according to Tory minister Sajid Javid) “neofascist”. The ABC-ers base this slur on the appalling and racist social media remarks of a very small minority.

If that’s the standard for labelling an entire party of half a million people racist, then the Tories should be toast. But our conservative and disingenuous establishment press has never held Conservatives to the same standard. This is a mistake, as Jewish journalist and organiser Joseph Finlay wrote recently:

There are many threats to Jews – and we are right to be vigilant. These threats come primarily from resurgent nationalism, anti-immigrant sentiment and a Brexit narrative that seeks to restore Britain to a mythical age of ethnic purity. The idea that Britain’s leading anti-racist politician [Corbyn] is the key problem the Jewish community faces is an absurdity, a distraction, and a massive error.

As human beings, we tend to resist self-scrutiny. It really takes something to keep your mind open to your own potential for prejudice. And that process of self-examination is made harder when others exploit it for cynical ends. But the left must continue to do so regardless. Because it’s the right thing to do.