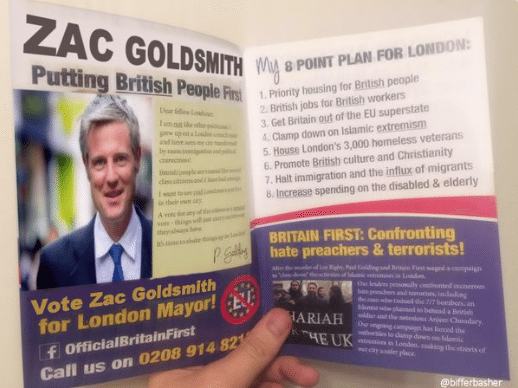 The Conservative campaign of Conservative candidate for Mayor of London Zac Goldsmith is facing mounting criticism today, for escalating the politics of racial prejudice.

Conservative MP, and heir to the Goldsmith family fortune, Zac Goldsmith is in a dogged battle with Labour’s Sadiq Khan to succeed Boris Johnson as Mayor of London. But as Khan pulled ahead in the polls, the Goldsmith campaign resorted to tactics which many have denounced as overtly, and covertly, racist.

On one occasion, Goldsmith’s campaign literature targeting Gujarati households in the capital appeared to racially profile the entire community as having the primary concern of keeping family jewellery safe.

Later, the campaign was accused of dogwhistle racism against Muslim candidate Khan – whose parents fled from India to Pakistan during the brutal horrors of the 1947 partition – with this racially provocative communication to London’s Indian population.

And again with the jewellery.

However, things now seem to have taken an unambiguous step in the same direction.

First, Goldsmith wrote a piece for those known race-baiters The Daily Mail, linking Khan to the terrorist attacks of 7/7. The piece was so overtly racist and unbefitting of a candidate for political office, that it provoked an immediate and angry response from Conservative Peer Baroness Warsi.

It wasn’t just Baroness Warsi who was appalled. As The Mirror reports:

“He fights anti-Semitism. He backs same-sex marriage. He’s against extremism, and he’s being portrayed as some radical in the literature of Zac Goldsmith .”

“It’s very important that Londoners vote out Zac Goldsmith and his disgusting campaign.”

Conservative leader David Cameron has been front and centre in focusing the Mayoral campaign around race, and attempting to taint Khan with the whiff of terror. Mr Cameron was called to task for a performance at Prime Minister’s Questions in March, during which he accused Khan of “sharing a platform” with Suliman Gani, a man the PM claimed “supports IS.” The indication was that Londoners voting for Khan were backing a candidate with links to the terrorist organisation. Of course, just a short while later, a picture of Goldsmith courting the very same Suliman Gani was distributed – meaning the PM’s behaviour was not only dog whistle politics, but hypocritical to boot. 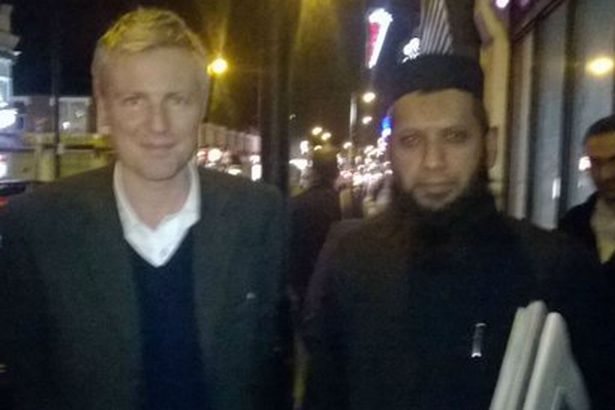 The campaign holds overtones of the Smethwick by-election of 1964 – dubbed the most racist episode in British electoral history. Conservative candidate Peter Griffiths ran on the campaign slogan: If you want a n*gger for a neighbour, vote Labour.

“I would not condemn any man who said that,”

“I regard it as a manifestation of popular feeling.”

Sadly, his strategy was as effective as it was morally wrong. Despite wide Labour gains around the country, Smethwick swang sharply to the Conservatives and Griffiths secured victory. As the defeated Labour incumbent, shadow Home Secretary Patrick Gordon Walker, left the hall, Tory supporters jeered:

It would appear that the Goldsmith campaign is attempting to revive the strategy that was so successful for the party in that most racist campaign in British electoral history.

In response, Twitter users are sharing what we believe to be a mock leaflet from far-right group Britain First endorsing the Conservative candidate. We were unable to establish the veracity of the leaflet prior to publication.

It is difficult to know whether this campaign is in line with Mr Goldsmith’s personal beliefs, or simply an act of cynical desperation on the part of his strategists. Mr Khan extended his lead to 20 percentage points in last week’s YouGov poll, and bookmakers Betfair have now slashed Mr Goldsmith’s chances of winning to just 2%.