Revealed: these secret documents expose how our NHS could be completely sold-off - Canary 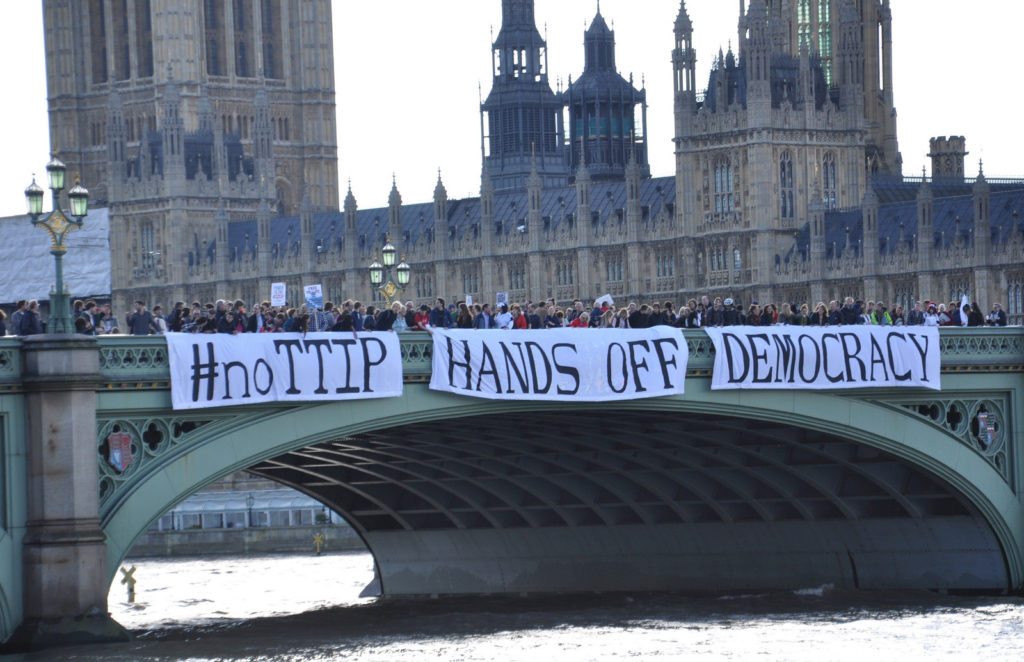 After last week’s commendable junior doctors strike and the utterly lackadaisical approach from the government you’d be forgiven for thinking the future of the NHS couldn’t look anymore precarious.

You may well be wrong.

On Monday, Greenpeace’s Dutch branch released a data leak of confidential documents relating to the Transatlantic Trade and Investment Partnership (TTIP) that is currently being negotiated in private between the US and the EU.

248 pages covered 13 out of 17 chapters of the proposals. From agriculture to wine via fisheries and financial services very little was left to the imagination. The data exposed the underlying thrust of TTIP – to reduce government’s control over international trade and allow corporations a fundamentally free ride in terms of how they go about their business.

While representatives from the EU hurriedly dismissed Greenpeace’s accusations as a “storm in a teacup” (a teacup made in America, perchance?) the environmental campaign group were insistent: “The negotiations must stop because the current negotiators are not acting in the public interest”.

But just how do the newly-released documents affect the NHS? And can we really believe David Cameron when regarding concerns he says “some people argue in some way this could damage the NHS. I think that is nonsense”?

Numerous aspects of the leaks relate to the NHS

Scientific research and development is included and will be subject to any TTIP legislation – an area the government has just committed £5bn of investment to. The deal will also have ramifications for NHS Global, the government’s international branch of the NHS which in layman’s terms sells health services worldwide. This would now be subject to strict competition laws to ensure that “treatment no less favourable” was given to US companies as well.

But the genie that may well be let out of the bottle in these TTIP revelations is the one we all suspected. Except now we have some confirmation. The unchecked involvement of private corporations in our public health service.

“TTIP cannot be seen as achieving less than what was achieved with the Trans-Pacific Partnership (TPP)” are the exact words of the US negotiators with reference to “State-owned Enterprises” (SOEs). SOEs are publicly-funded institutions like the NHS which are ultimately controlled by the government. What the TPP deal achieved, as President Obama succinctly put it, was to go

beyond previous agreements in addressing the distortions SOEs can cause in the market. It is the first Free Trade Agreement to seek to address comprehensively the commercial activities of SOEs that compete with private companies in international trade and investment. Most of the key elements in the SOE chapter are new, and we expect them to blaze the trail for work on this issue.

Translated? SOEs interfere too much with the quest for profits by multinational corporations and must be reined-in.

The mechanics of how this will be done are abundantly clear in the TTIP leaks. A “Committee on State-owned Enterprises” will be set-up. This group will meet on a yearly basis to assess each nation’s public sector organisations and will have full access to their accounts, investment plans, structural data and business models. They can also hear concerns from either the US or the EU in relation to SOEs adversely affecting private enterprises. Moreover, there is no guarantee that a UK representative will be present on the committee.

SOEs will also be subject to competition laws (that “favourable treatment” line, again) and any state intervention like we have just witnessed with Tata Steel would be robustly opposed. Apparently “State interventions have the potential to distort the proper functioning of markets, and undermine the benefits of trade liberalization”. Who knew?

But it’s the ability of corporations to object to SOEs that raise the most concern. Despite rigorous campaigning and concessions by the negotiating parties the controversial “Investor-State Dispute Settlement” clause still remains. It has been rebranded as “Investment Protection” but the onus is the same. If corporations consider that governments are treating them in an unfair manner regarding their access to certain markets they have grounds to sue. The NHS is a prime example of this not least because of the myriad of public-private partnerships that already operate within it.

Our government’s current plans for the NHS also tie-in quite nicely with TTIP. By 2020 the aim for the health service is to have full integration between all divisions (health, social care etc), with devolution like we have seen in Manchester the model for the financing.

Under the radar, we are also witnessing this being taken one step further. The currently-embattled Southern Health Foundation Trust is in the process of becoming a “Vanguard” operation where GP’s services, health and social care is controlled under one umbrella and by one commissioning group only. Couple this with financial devolution and you have a perfect model for a firesale of health services across the country. TTIP fully accounts for this as the leaks clearly state that a government can not “divide a procurement into separate procurements”. No need – the Tories have already primed them ready as one contract.

we must be vigilant, we must be vocal, we must demand that the NHS will always remain an institution for the people and by the people. We must never ever let the NHS free from our grasp because if we do your future will be my past.

The TTIP documents don’t scream “We want your NHS and we’re going to offer it to the highest bidder!”. They merely facilitate the mechanisms for the health service and any other public institution to be irrevocably damaged by profit-grabbing, private corporations who have no real concern for patient safety. Unless you are one of their shareholders.

With a Conservative government who are already trying to sell our health service behind our backs, TTIP will allow them to go at this full-throttle. And to think they wouldn’t is naive, at best.

Email your politicians telling them to oppose TTIP.