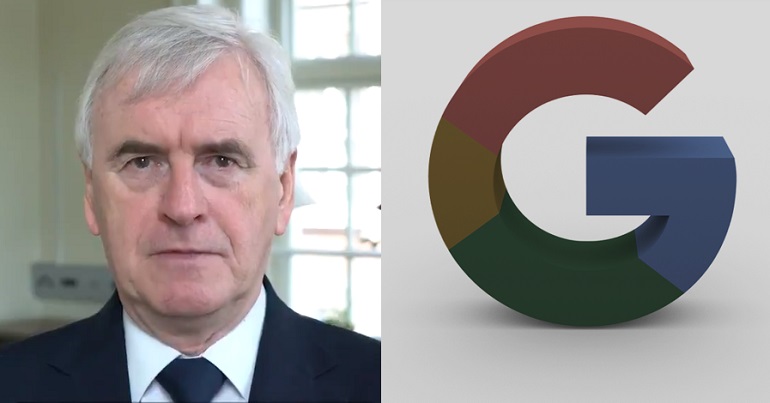 Shadow chancellor John McDonnell has ripped Google a new one over its tax bill, calling it “frankly… an insult”.

On 28 March, Google UK released its company accounts. As BBC News reported, they showed that the company paid corporation tax of £49.3m on UK profits of £202.4m. But its sales in the UK were around £5.7bn, with revenue of £1.27bn. As BBC economics editor Kamal Ahmed said:

A tax on those revenues would raise substantially more in the UK than the present £50m tax bill on its UK profits.

Understandably, McDonnell was less than impressed. So he took to social media to air his discontent. He said in a video blog:

Yesterday, Google announced its UK tax bill. Frankly, it’s an insult. Google is now the second largest company on earth… What is the result of companies like this failing to pay a fair level of taxes?

The shadow chancellor went on to describe what happens “under the Tories” when the tax revenue of companies like Google is lost:

But just how does the tech giant manage to get such a low tax bill?

As the Tax Justice Network wrote in 2016:

International tax rules set by the Organisation for Economic Cooperation and Development (OECD), allow Google to earn revenue from UK (and pretty much all non-US) customers and have them booked in Ireland, where the associated profits are taxed at a lower corporation tax rate (12.5%) than would be applied in most countries.

The same rules also allow Google to reduce its tax bill even further by transferring these profits to Bermuda through the payment of a royalty – known among tax avoidance literati as the “Double Irish” structure. What is left to be taxed in Ireland and in the UK is small change…

And while £50m doesn’t seem small change to most of us, in terms of the tech giant’s total worldwide revenue (£77.93bn) it is just 0.06%. So McDonnell isn’t far wrong to say Google’s tax bill is “an insult”. But perhaps a better turn of phrase would be ‘disgusting’.