Facebook has, to put it delicately, dropped a heaving, sweaty bollock when it comes to:

As the person who is ultimately responsible for this world-shattering fuck up, Mark Zuckerberg was summoned to Washington to…

…be allowed to apologise and explain why he’s still the best man to deal with this!?

What was supposed to be a ‘tough grilling’ ended up being more of a ‘light steaming’. Zuckerberg was asked questions like:

You’re doing a great job – would you like to speak more about that?

Could you explain why monopolies are so cool?

Would you mind if we regulate you a smidgeon, or would you prefer we just butt out?

Zuckerberg also said that Facebook is in an “arms race” with Russia. One of the people questioning him responded:

Well, if there’s anyone qualified to lead the charge for digital democracy on the virtual Western front, it’s you, Leaky McDatapants – err – I mean Mark Zuckerberg.

Although we could just delete Facebook, it would ultimately be replaced with something that was – for all intents and purposes – another Facebook. And so, practically speaking, the smart move is to break up and regulate the shit out of this one. You know – rather than waiting 15 years to see how out of hand Facebook 2.0 gets before anyone notices.

Oh, and if you’re wondering why there were no jokes about Zuckerberg looking weird, it’s because: 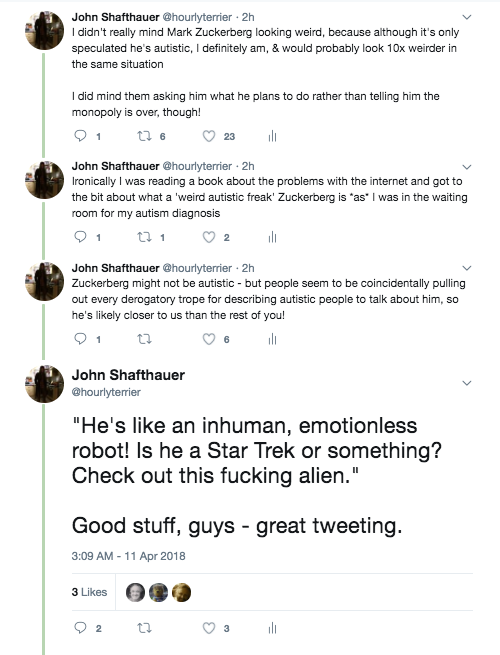