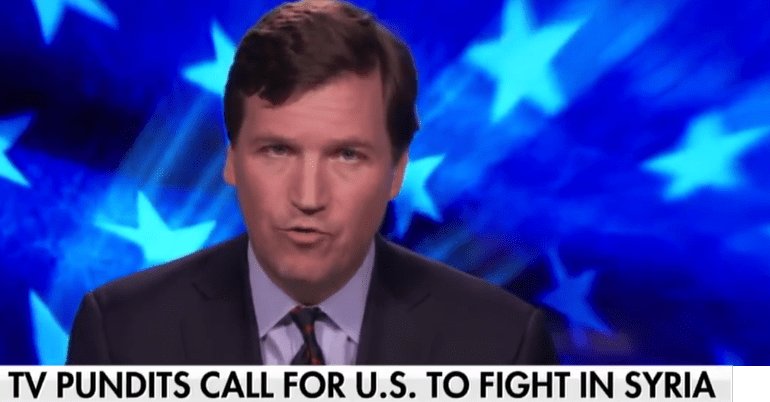 On 9 April, US reporter Tucker Carlson went rogue and destroyed the case for invading Syria live on air. This is surely an indictment of the wider ‘liberal’ mainstream media. With war hawks everywhere, one of the only sober discussions of Syria’s recent chemical attack has come from a right-winger on Fox News:

As Trump prepares to bomb Syrian Govt targets (again), 2 of the loudest media voices against it are Tucker Carlson & Laura Ingraham (sorry, just a fact). For all the talk about "state TV," were any similar levels of dissent aired on MSNBC about Obama's various bombing campaigns?

Challenging the consensus that ‘Assad must have done it’, Carlson said:

We should be sceptical of this, starting with the poison gas attack itself… They have no real idea what happened. Actually, both sides in the Syrian civil war possess chemical weapons.

Dozens of people have reportedly died after an alleged chemical weapons attack on Douma. Saudi-backed opposition group Jaish al-Islam (or ‘Army of Islam’) controlled the city until a deal announced on 8 April. That same rebel group appeared to use chlorine gases on Kurdish-led forces in 2016.

Additionally, in 2013, a UN commission into human rights abuses in Syria suspected that anti-Assad groups had used nerve agent sarin.

In short, Assad could have used chemical weapons, but so could opposition forces.

Carlson also questioned the logic of Assad using chemical weapons at a stage when he’s at a military advantage:

How would it benefit Assad using chlorine gas last weekend? Well, it wouldn’t. Assad’s forces have been winning the war in Syria. The administration just announced its plans to pull American troops out of Syria… That’s good news for Assad. And about the only thing he could do to reverse it and to hurt himself would be to use poison gas against children.

On 3 April, Donald Trump announced proposals to pull US troops out of Syria after ‘success’ against Daesh (Isis/Isil). But it wasn’t just regarding US involvement that Assad was making gains. Jaish al-Islam is now evacuating Douma after reaching a deal with Russia. The Assad regime is about to reclaim the last of eastern Ghouta. So critics, like Tucker and former UK ambassador to Syria Peter Ford, have questioned why Assad would bring international condemnation on himself right before victory.

“Let’s be real, we do tolerate atrocities like this all the time”

Carlson then drew attention to an apparent double standard in foreign policy. Responding to pundits who say “atrocities like this cannot be tolerated”, Carlson said:

Okay. But let’s be real. We do tolerate atrocities like this all the time. For example, there’s a devastating famine killing children in Yemen right now. The Saudis are causing that famine. Should we drop tomahawks on Riyadh in response? Not until it’s on YouTube apparently, when you conduct foreign policy by viral video. Pictures are essential.

Save the Children estimates that 130 children are dying a day in Yemen from extreme hunger and disease. That’s a direct result of the Saudi-led bombing campaign, which is aided by the US and the UK. The British Conservative government has licensed around £4.6bn-worth of arms to Saudi Arabia since it began striking the poorest country in the Middle East.

Both US and UK forces are helping the Saudi military bomb Yemen. Yet we are supposed to believe that these administrations care about the welfare of Syrians. From The Guardian to right-wing outlets, commentators and broadcasters are demanding military action on Syria before we have any evidence. They only have the word of opposition groups on the verge of defeat.

We must argue for a rational approach, and prevent the media frogmarching us into another disastrous war.