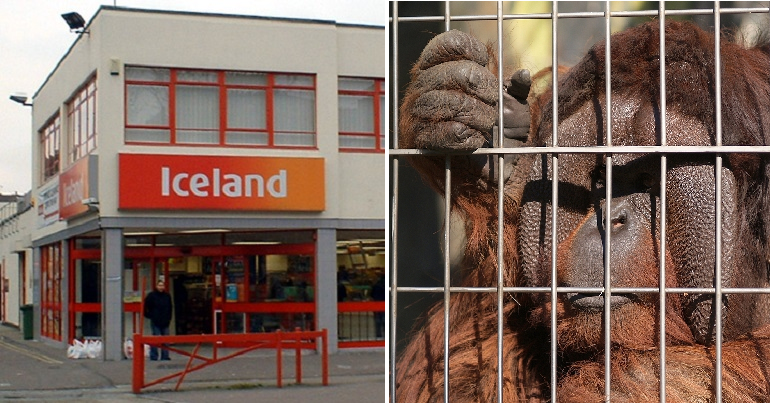 The supermarket Iceland is leading the way with a bold move that could save orangutans and the rainforests.

Iceland has announced its commitment to removing palm oil from its own-label products by the end of 2018. It explained on Twitter:

BREAKING NEWS: We're the UK's first supermarket to commit to removing #palmoil from our own label products by the end of this year! Watch here to find out why…#PalmOilAlarmCall pic.twitter.com/hfGvH2QRDW

This news was welcomed by Greenpeace and many others:

BREAKING: By the end of 2018, @IcelandFoods will become the first UK supermarket to stop using palm oil in its own brand foods.

This is what happens when suppliers, traders and manufacturers fail to clean up their act and continue destroying rainforests to produce palm oil. pic.twitter.com/lvMTMvYcJi

Until Iceland can guarantee palm oil is not causing rainforest destruction, we are simply saying ‘no to palm oil’. We don’t believe there is such a thing as ‘sustainable’ palm oil available to retailers, so we are giving consumers a choice about what they buy.

Orangutans are currently a threatened species. And the main threat to the survival of orangutans in the wild is the massive expansion of palm oil plantations in Borneo and Sumatra. According to UN reports, this has caused widespread forest destruction in Indonesia and Malaysia. Every hour, 300 football fields of remaining forest are cleared across South East Asia to make way for palm plantations. In the last 20 years, over 3.5 million hectares of Indonesian and Malaysian forest have gone. As a result, almost 80% of orangutan habitat has disappeared.

Clearing forests for palm oil plantations has had a huge impact on the population of many species – and not only orangutans. Palm oil farming is destroying the ecological diversity of countries like Indonesia and Malaysia. And it has social impacts too, especially on indigenous peoples.

The Living Planet Index reveals that global populations of animals – including fish, birds, mammals, amphibians and reptiles – decreased by 58% between 1970 and 2012. That’s over half of the planet’s animals. And if the situation continues, we could lose two thirds by 2020.

The latest edition of the World Wildlife Fund’s (WWF) Living Planet Report tells us of an imminent global catastrophe due to human activity. It also tells us how we can start to put it right. Essentially, we all need to act now to reform our food and energy production and meet global commitments on addressing climate change, protecting biodiversity, and supporting sustainable development.

Positive response for Iceland, but we need so much more

Iceland’s announcement largely received a favourable response across the media. The Guardian, The Times, the Evening Standard, and even the Daily Mail all reported on it. The Telegraph compared palm oil to plastic, and The Sun wrote about it as a health and fitness issue.

HOW WONDERFUL that Iceland Foods have taken the initiative and have started to ban palm oil from some of its food items. I will definitely be shopping with them . I find it extremely difficult to buy foods that are free from the oil.. Good Iceland. Well done

But as Friends of the Earth tweeted in response to the BBC, much more needs to be done.

Today's @IcelandFoods announcement on #palmoil is welcome, but highlights failure of industry and government to clean up the supply chain. We need strong laws to stop commodities harming forests, wildlife and communities. https://t.co/rgLjkQidW2

Hi Amanda, thanks for your question. The replacement oil is different for different products, meaning that there is a mix of oils and fats that don’t damage rainforest. We’re using ingredients like; sunflower oil, rapeseed oil, butter and lard.

Hi, currently 50% of all supermarket products currently contain palm oil. We’re busy working behind the scenes to replace palm oil in all of our own label products, by the end of 2018. We're speaking to our branded suppliers & encouraging them to make the positive change too.

Hi Alan, thanks for your interest and concern. We’re passionate about pledging palm oil free on our own label products, but this is just the start. We’re speaking to all of our branded suppliers too and encouraging them to make the change too! 😃

We need to stop consuming palm oil. And whatever Iceland’s motives, this pledge is an important part of the ongoing effort to reduce the consumption of palm oil. And other supermarkets may now follow Iceland’s lead – especially if it improves their bottom line.

Iceland’s move might be a small step, but it’s clearly a step in the right direction.