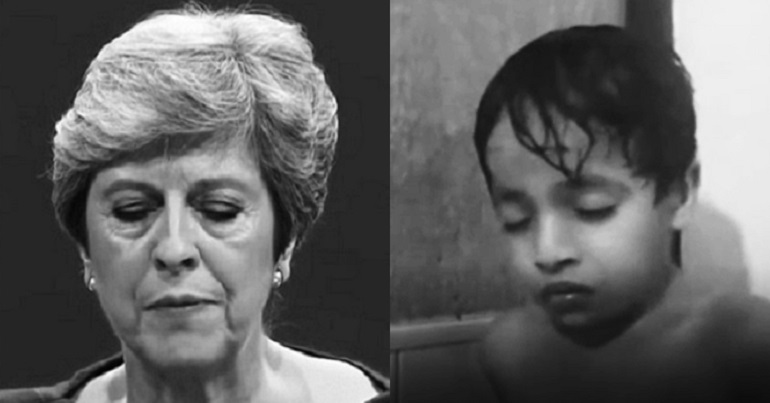 As the situation in Syria escalates, UK prime minister Theresa May has reportedly asked for more evidence that the Syrian government carried out an alleged chemical weapons attack in Douma. But as she probably knows, it’s not just the Syrian government that’s been accused of using chemical weapons. Because Syrian opposition groups, funded by the UK government, have been accused of war crimes too.

In 2016, Amnesty accused opposition groups in Syria of carrying out “indiscriminate attacks” in a predominantly Kurdish area of Aleppo. It said at the time that:

Armed groups surrounding the predominantly Kurdish Sheikh Maqsoud district of Aleppo city have repeatedly carried out indiscriminate attacks – possibly including with chemical weapons – that have struck civilian homes, markets and mosques, killing and injuring civilians, and have displayed a shameful disregard for human life…

Amnesty claimed that some patients displayed symptoms consistent with chlorine gas poisoning – the same chemical allegedly used in the Douma attack on Saturday 7 April. The organisation said in 2016 that the groups responsible for possible “war crimes” included Nour al-Deen Zinki, which was linked in a BBC Panorama investigation to UK government money.

As BBC News reported, Panorama exposed the fact that foreign aid money going to Syria via Adam Smith International (ASI) was falling into the hands of “extremists” – specifically Nour al-Deen Zinki. The group has also been linked to other atrocities, including the beheading of a 12-year-old boy.

The government suspended the aid programme pending investigation on 16 November 2017. But it resumed funding on 11 January 2018 after its investigation “cleared ASI of any wrongdoing”, an ASI spokesperson said.

Also, on 21 March this year, the UK government admitted in a parliamentary response that it had provided £32m of “support” to the “moderate opposition” in Syria between 2011 and 2017. It refused to confirm or deny if this money had been going Ahrar al-Sham, which is another group accused by Amnesty of possible war crimes.

The current situation in Douma, and Syria more broadly, is fluid. At the time of publication, the US, UK and French governments are in talks over a possible military response to the alleged attack in Douma. Reports indicate that, on 7 April, more than 70 people died after a bombing raid on the city in Eastern Ghouta. Syrian opposition groups and their medical partners claim that victims had symptoms consistent with chemical weapon poisoning. No outside organisations have access to Douma, but the World Health Organisation (WHO) says that opposition groups claim more than 500 were injured in the attack.

But the Syrian government and its ally Russia disagree, claiming there was no evidence of a chemical weapons attack. Russia has said that any Western “illegal military endeavour” would be met with retaliation. So far, there has been no official independent investigation into the incident. The Organisation for the Prohibition of Chemical Weapons (OPCW) is preparing to visit Douma at the request of the Syrian and Russian governments.

Syria’s war: no innocents, except civilians

The complete impasse over Syria shows little sign of abating. And the UK government’s historical funding for extremists shows there are no ‘good guys’ or ‘bad guys’ in the Syrian conflict. There are merely individual players out for their own ends. For the US, the West, and their Russian counterparts to be so willing to act fast and loose over military action shows all administrations’ lack of care for ordinary Syrians, who have already been subjected to over seven years of hellish conflict.

As I wrote over two years ago:

We are witnessing the first “World War” of the 21st century — but one that is executed by proxy. Every… nation is… feverishly trying to gain control of the last Middle East outpost as yet untouched by globalised multinationalism: Russia, seeking to secure the same gas supply and commodities as the EU; the US, desperately wanting regime change so it can plunge its claws into the one blank corporate canvas left in the Middle East; the Sunni Gulf regimes, frantically suppressing any Shi’a uprising for fear of losing their archaic, totalitarian grip on their kingdoms; and Turkey, under the increasingly despotic Erdogan, attempting to play everyone off against each other.

Sadly, with the current situation in the West, Russia, and at the UN, it appears little has changed.

CORRECTION: This article was corrected on 12 April to reflect the fact that government aid to Syria via ASI resumed on 11 January 2018 after its investigation “cleared ASI of any wrongdoing”, according to an ASI spokesperson.