McDonald's workers have organised a rave with John McDonnell. No, really. - Canary 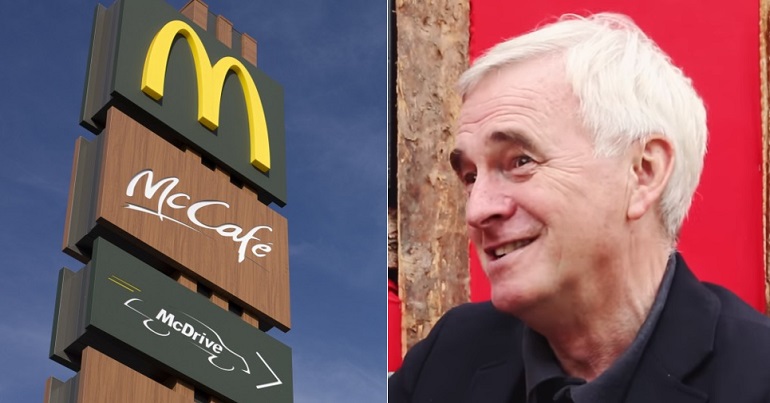 Labour’s Shadow Chancellor John McDonnell was previously unknown for his love of raves or McDonald’s. That may be about to change…

McDonald’s workers and their trade union have organised a party in aid of their strike fund. Featuring DJs from the Resis’Dance collective, it’s happening on Friday 20 April at Styx in north London. McDonnell is down as a gust speaker at the event, although it’s unclear at present whether he’ll be spinning the decks, ripping up the mic, or busting some moves on the dance floor.

But the rave and McDonnell’s appearance do have a serious cause.

As The Canary previously reported, McDonald’s staff were striking over pay, contracts, and grievances with management. The latter, as one worker told Press Association, was so bad it felt to him like it’s “okay for us to be abused at work”:

The managers have sworn at us, shouted at us, just general abuse when we get to work. I feel like whatever stress they are under they put on us so it’s really unfair.

I do feel a little bit intimidated going into work…

And the strike, which union members voted for by 95.7%, had an effect. Because McDonald’s has since offered its UK staff a choice of fixed hour contracts or “flexible” zero-hour ones. Also, the fast food chain has increased staff pay, touted as the “biggest pay rise in a decade”.

But the union which represents McDonald’s workers, says its members are still not happy. As the Bakers, Food and Allied Workers Union (BFAWU) president Ian Hodson told The Caterer:

Representatives from six stores attended a meeting and took a decision that they wished to be balloted on industrial action on issues of pay, unequal pay for young workers, and for a choice of fixed hours. The union is committed to supporting its members and campaigning for £10 an hour, an end to zero hour contracts, and to give McDonalds workers a voice.

McDonald’s workers: taking on a giant

So, the McStrike! fundraiser party is in aid of this. McDonnell has supported the McDonald’s workers from the start of their campaign, speaking at a high-profile rally outside parliament last September:

The continued action by McDonald’s workers and the BFAWU shows what can be achieved by a small group of workers against one of the largest corporations on the planet. So, if you fancy partying with the shadow chancellor and supporting a good cause, you know what to do. Labour sources also told The Canary he might be changing his name by deed poll to ‘MC Donnell’.

– Support Fast Food Rights and donate to the McStrike! fund.