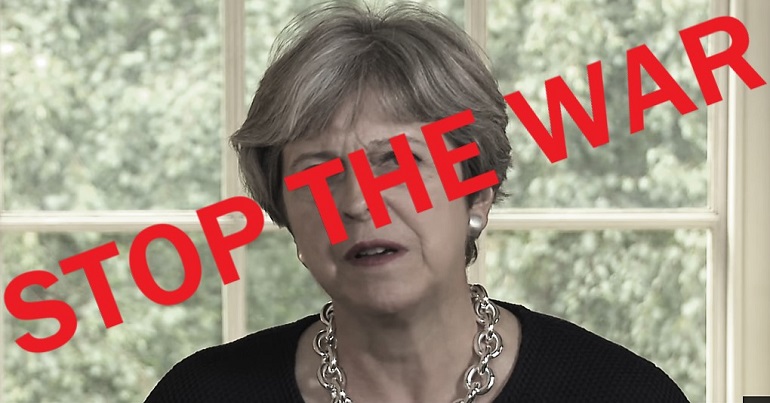 As the situation between the West, Syria and Russia continues to look precarious, people are going to Theresa May’s front door on Friday 13 April to tell her straight: her actions are ‘not in my name’.

An emergency protest for an international emergency

At the time of publication, the US, UK and French governments are in talks over a possible military response to the alleged chemical weapon attack in Douma. Reports indicate that, on 7 April, more than 70 people died after a bombing raid on the city in eastern Ghouta. The West is saying the Syrian government is responsible; something both it and Russia deny. It’s rumoured that May will authorise a military response without parliament’s approval. Labour leader Jeremy Corbyn has objected to this, saying in a tweet:

It is vital that parliament has the chance to debate and decide in advance on any government proposals to support a new US-led military intervention in Syria, which risks a dangerous escalation of the conflict.

So the Stop the War coalition has organised an emergency protest outside Downing Street on Friday. It follows a letter, organised by the group, published in The Guardian on Thursday 12 April. The letter – signed by MPs, journalists, musicians and campaigners – says: 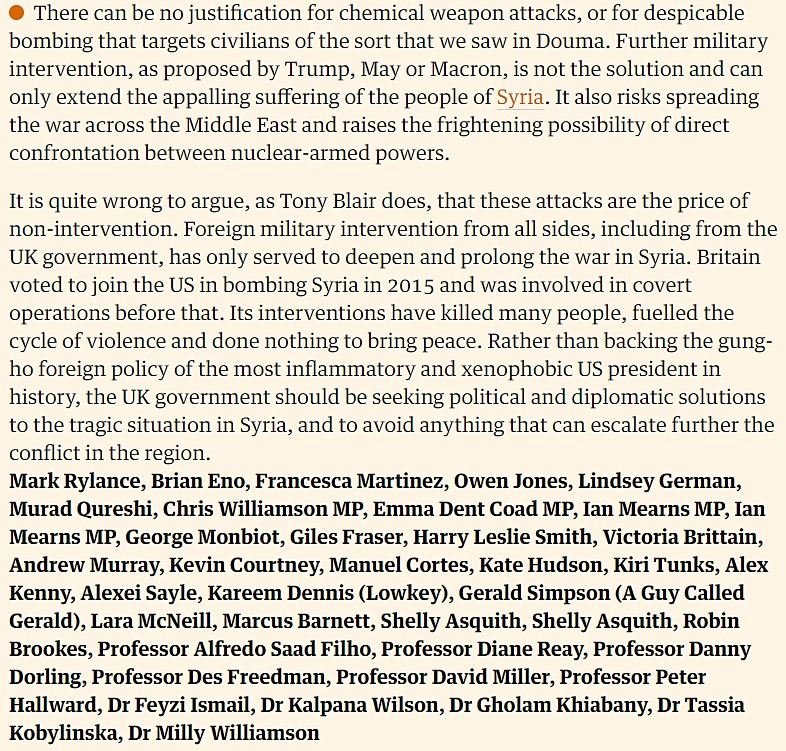 At the protest on Friday, the Stop the War coalition will be handing this letter to Downing Street. It told The Canary:

Protesters will be taking to the streets in the next few days to try and stop the rush to war. Polls show the overwhelming majority share our opposition to Trump and May’s plans for an attack. We are calling on May to pull back from the brink.

There will then be another protest when parliament reconvenes on Monday 16 April, at 5:30pm in Parliament Square. The Stop the War coalition told The Canary it will be “addressed by MPs, trade unionists and celebrities”.

If the opinion polls are right, the Stop the War coalition’s position reflects public opposition to any military intervention in Syria.

Syria: no appetite for war. Except for May.

As The Canary previously reported, a survey by YouGov released on 12 April found that 43% of people oppose airstrikes on the Syrian military in response to the alleged attack. Under a quarter (22%) support the action. 34% don’t know.

The results of the survey appear to show a shift in public opinion over recent days. A YouGov survey from 9 April, two days after the Douma attack, was somewhat different:

After an alleged chemical attack in a rebel-held Syrian town killed at least 70 people, 44% of Brits say they would support a military response, 20% of whom would support Britain being a part of said response – 22% wouldn't support any military retaliation https://t.co/h9TyB1Qn3k pic.twitter.com/DKrHhxROEB

The situation surrounding Syria is extremely fluid, morphing all the time. But what does remain consistent is the cavalier attitude of the UK prime minister, who seems to think she can have her ‘Thatcher/Falklands’ moment. Still, with no apparent public appetite for this, and even her own MPs voicing their concern, May could be making an extremely wrong-headed and dangerous move, the results of which may be catastrophic. Anyone and everyone who opposes May’s arrogant stance should speak up, and quickly.