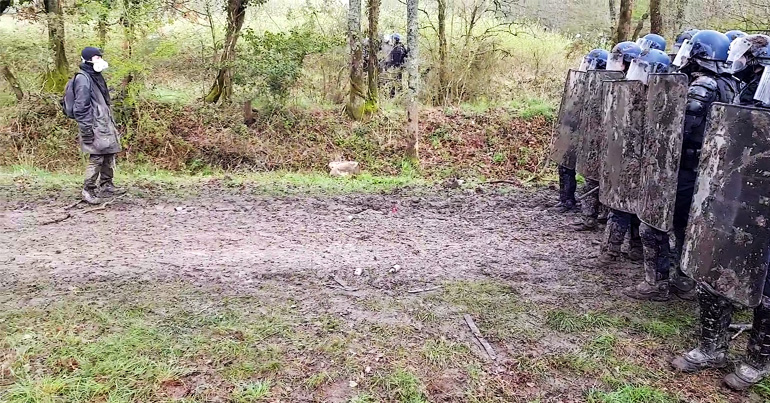 French police are evicting people from a massive area of land previously earmarked for an airport development. But the people living there are now fighting back.

This region has been considered for the development of an airport for more than 50 years, gaining the official name of “Zone d’aménagement différé” (or zone for future development). But a camp to resist its building was established in 2008, after construction was given the go-ahead. Locals and activists hoping to stop the building named the area “Zone à défendre” (ZAD) – or ‘zone to defend’. And they’re known as Zadistes.

Since 2008, La ZAD has become a thriving community that its residents called “Europe’s largest laboratory of commoning”. Zadistes have built homes, communal kitchens, bike workshops, a radio station, a brewery, a library, and much more. And the camp, home to about 250 people, has support from local residents and farmers.

The French government ended the airport’s development on 17 January. And the announcement was met with celebrations by Zadistes. But French prime minster Édouard Philippe also said during the announcement that the government would look to clear the camp by spring.

Zadistes responded at the time saying:

But on 8 April, around 2,500 police arrived to begin evictions.

There has been confrontation between police and Zadistes since the outset. Cops have been seen using tear gas, stun grenades, riot equipment and armoured vehicles. And Zadistes are responding with barricades, molotov cocktails and even catapults. Farmers are also arriving with tractors to support the Zadistes.

it could be holding demos at your local french embassy or consulate, or taking actions against any suitable symbol (corporate or otherwise) of France

There have already been demonstrations across France and the rest of Europe. In London, activist group Platform held a demo outside the French consulate on 9 April.

– Answer the call for solidarity by organising a protest or demo.

– Stay up to date on what’s happening with Enough is Enough!‘s live blog.

– Check out Huck Magazine‘s beautiful photo article on La ZAD from before its eviction.