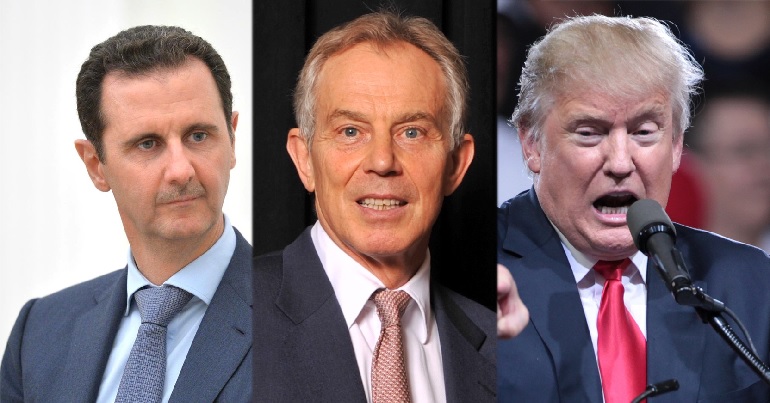 With all the usual war hawks pushing us to bomb Syria, ordinary citizens really need to see the evidence which suggests we should take a step back and think for ourselves.

The ‘secretary of defense’ is the main defence policy adviser to the US president. And in February, current defence secretary James Mattis admitted that his country could not confirm that the Assad regime in Syria had used the chemical weapon sarin on its citizens. He said:

We do not have evidence of it.

Mattis offered no temporal qualifications, which means that both the 2017 event in Khan Sheikhoun and the 2013 tragedy in Ghouta are unsolved cases in the eyes of the Defense Department and Defense Intelligence Agency.

He also suggested that this called into question the words and actions of all those who rushed to place definitive blame on the Assad regime in these cases, saying:

Mattis tacitly impugned the interventionists who were responsible for pushing the “Assad is guilty” narrative twice without sufficient supporting evidence, at least in the eyes of the Pentagon.

While in no way detracting from the horror of what took place against innocent civilians in Syria, it is time for America to stop shooting first and asking questions later.

UK prime minister Theresa May has suggested that Assad’s government was probably behind the recent chemical attack in Douma, which reportedly killed dozens of people.

But US President Donald Trump clearly thinks the Assad regime is to blame. And on 11 April, he tweeted:

In 2017, the Trump regime bombed Syria after another apparent chemical weapon attack – without evidence of government culpability, and with the overwhelming support of the mainstream media. And it looks like the US government is planning to do the same thing again.

Labour Party leader Jeremy Corbyn, meanwhile, is aware of the dangers of jumping the gun. So he’s avoiding pointing the finger in the absence of evidence:

The horrific deaths and injuries in Douma point to a chemical attack which must be fully investigated by the UN and those responsible held to account. The need to restart real negotiations for peace and a political settlement in Syria could not be more urgent.

Veteran journalist Glenn Greenwald has also called for citizens to wait for credible evidence before jumping to conclusions:

Also, as I said on @DemocracyNow yesterday, I am 100% opposed to western military intervention in Syria under all circumstances, but claims that chemical weapons were used & that Assad did it should be fully accepted only after a credible investigation and evidence presented.

Any room for doubt? Any cause for caution?

The Organisation for the Prohibition of Chemical Weapons/UN Joint Investigative Mechanism has said the Assad regime is guilty of using chemical weapons on four occasions – in April 2014, twice in March 2015, and in April 2017.

But as The Canary reported on 9 April 2018, anti-Assad forces have also reportedly used chemical weapons and committed war crimes in Syria. Daesh (Isis/Isil) in particular has apparently used such weapons on multiple occasions.

And fortunately, some public figures have been pointing out very clearly that the Syrian conflict is nowhere near as simple as: ‘Assad = bad. Anti-Assad forces = good.’

"(on Syria) there are two competing simplistic narratives"

Looking for some much needed clarity on Syria? Allow @ggreenwald to oblige, c/o @democracynow. pic.twitter.com/1cuH6XX5O3

In fact, even Conservative MP Julian Lewis has called for caution, warning on BBC Newsnight that a Western campaign against the Assad regime could be tantamount to “helping al-Qaeda”:

“What we’ve got here in Syria is a choice between monsters on the one hand and maniacs on the other” argues Julian Lewis MP #newsnight pic.twitter.com/b93S0npeY5

If Tony Blair and Trump want it, always think twice

And if critical thinking and calls for evidence weren’t good enough reasons to question the West’s march to war in Syria, a look at the people championing that march might just tip the scales. Tony Blair, for example, wants the UK government to take military action against Assad:

The man who destroyed Iraq given headline coverage to boost his calls for another war https://t.co/YR16xcMybf

War criminal Tony Blair — who illegally invaded Iraq in a war of aggression based on lies — is now openly calling for war on the Syrian government based on accusations that there has been no independent investigation intohttps://t.co/K6zeAnzO0a

The manufactured case for invading Iraq, of course, led to disaster. It reportedly killed at least a million Iraqis and left thousands of children with deformities and cancer. And the context gave the forerunners of Daesh fertile ground to grow. Global terrorism has skyrocketed ever since (with Daesh and similar Wahhabi groups responsible for the majority of non-state terrorism). The invasion also cost UK taxpayers billions of pounds.

Others have pointed out that favouring a knee-jerk reaction on Syria would also put people on the same side as the infamous intellectual and moral lightweight that is Donald Trump:

1) Trump is unstable, erratic, a lunatic, possibly has dementia, and

2) he should start another war in Syria

Also: it's bizarre to accuse leftists who oppose bombing Assad of united with the far right when those who long favored regime change are neocons, and the person preparing to bomb Assad & who tweeted this is named "Donald Trump." These are the allies of bombing advocates: pic.twitter.com/Tm2bPyWnUP

Yet again, the same old war hawks are gearing up to bomb a foreign country without evidence to back their cases up. And yet again, they’re throwing critical thinking out of the window, before setting it on fire.

It’s entirely possible that the Syrian government was behind the most recent chemical weapon attack. But as with previous attacks, we simply don’t have the evidence to prove it. And we all know how disastrous bombing countries based on unproven assumptions can be.

History tells us to think twice. And that’s exactly what we should all be doing right now.