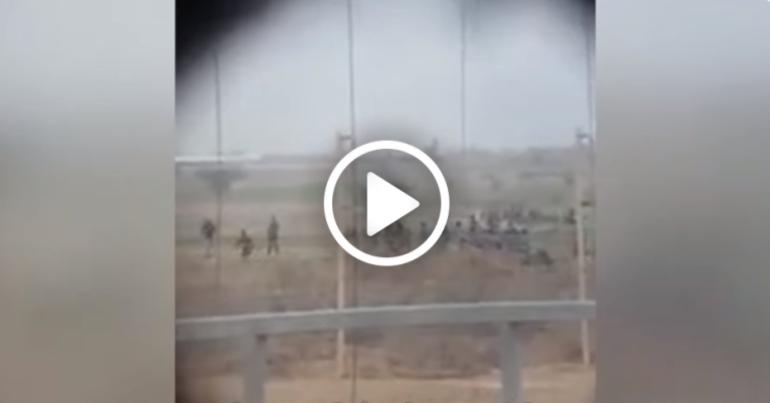 A video has emerged of Israeli soldiers celebrating as they shoot an apparently unarmed Palestinian man. The shocking footage has caused outrage within Israel and around the world.

Israeli soldiers can be heard discussing the shot against the Palestinian man near the border fence. As the shot is taken and the man falls to the floor, the men cheer and celebrate. “Wow, what a video!” the filming soldier screams, before calling the man a “son of a bitch”.

The footage has been shared widely in Israel, and on 6 April activists confronted Israeli soldiers at the Gaza border.

An official statement from the Israel Defense Forces (IDF) said the incident took place during a “violent riot” on 22 December 2017. Israeli defence minister Avigdor Liberman said the sniper “deserves a medal”. The Palestinian man was motionless when the shot was fired.

At least 31 Palestinians have reportedly been killed by Israeli forces since the ‘Great March of Return’ protest began on 30 March 2018 at the Gaza border fence. Among the casualties was celebrated photo journalist Yaser Murtaja, who was wearing his press vest when fatally shot. His media company had recently received funding from the US State Department.

The following video contains graphic scenes which some may find upsetting:

“The hunting of humans”

There has been widespread condemnation of the IDF’s actions since the emergence of the video. Politicians within the Israeli parliament spoke out against the scenes documented. Ahmad Tibi, a member of the Joint Arab List party sitting in Israel’s Knesset, said:

The crime and the evidence. The hunting of humans, and the gratification the sniper derives from the ruthless murder of an unarmed Palestinian civilian in Gaza.

Breaking the Silence, an Israeli veterans’ organisation, claimed the video shows the reality of the situation on the ground. The group tweeted:

This video recorded by IDF soldiers while shooting an unarmed Palestinian protester on the Gaza border compels us to confront the reality of occupation – it is impossible to control millions of people against their will without morally degenerating pic.twitter.com/CzmCKV7VUA

“Most moral army in the world”

UK Labour Party leader Jeremy Corbyn has been praised for his stance in relation to the Palestinian protests, questioning the continued sale of British-made arms to Israel. But prime minister Theresa May has been largely silent on the issue.

In Israel, the IDF has said it will conduct a “full operation inquiry” into the sniper incident. But Avigdor Liberman faced a backlash after claiming the IDF is the “most moral army in the world”. Liberman stated:

The IDF is the most moral army in the world, but there can be no doubt when you are at the front and under a lot of tension and there is a need to unwind your nerves, there are emotions and one can understand it.

Videos of unarmed protesters being shot by IDF snipers have been on social media since the March of the Great Return protests began. But seeing such an act from this angle makes it all the more horrifying.