Jeremy Hunt has solved the housing crisis by 'mistake' - Canary 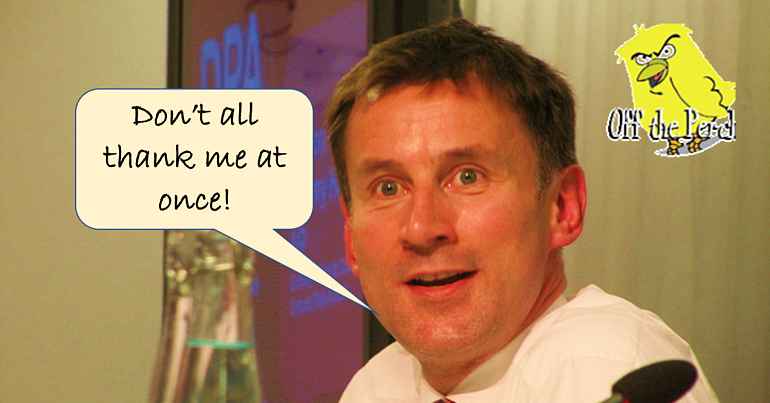 It’s now widely accepted that there’s little use to health secretary Jeremy Hunt beyond hilarious mispronunciations of his name:

However, in recent days Jeremy’s reputation has enjoyed a renaissance similar to post-2012 Mathew McConaughey. He made an ‘honest mistake’ when forgetting to inform the parliamentary register of members’ interests about a business he set up with his wife that purchased luxury flats in Southampton. And it has reminded people across the country of the properties they own and have forgotten about too!

Over 200,000 properties lie empty in England. Therefore, Hunt (who probably thinks he deserves to be called ‘Jezza’ after this but no, just no) has helped many households access the stable accommodation they so desperately need.

When someone says a Conservative politician has done a good thing, however, it’s usually a not true. So we sent our own intrepid reporter up and down the country to hunt down the facts.

John from Manchester told Off the Perch:

I’ve been privately renting for the past 15 years, moving every six months from one studio flat to another, spending over half my wages on rent. But when I heard Jeremy Hunt forgot about those flats he bought it jigged my memory! I actually bought a mansion out in Cheshire in 2002 which completely slipped my mind! It’s where all the Man U footballers live, no wonder José Mourinho keeps texting me inviting me to a barbie at his. I always thought the Tories main goal was to preserve the elite’s status but maybe I was wrong.

I’ve been renting a tiny room in Croydon at £800 a month for the past year. Surviving on the London Living wage in London is like an urban version of Bear Grylls’ The Island. Once I’ve paid for rent and travel there’s no money left for anything else. But, the recent Jeremy Hunt news reminded me I bought a flat in Dalston back in 1982. It’s gone up in value by 3,422% since then so I’m now officially a millionaire!

For years the DWP have been hounding people in my area, sanctioning us and investigating people for benefit fraud. Many people have become homeless due to its actions. We thought it was disgusting that people were constantly having to prove themselves worthy of such small sums of money. However, it turns out the government were doing it because they knew were rich anyway. Following the Jeremy Hunt news one of my neighbours remembered that the whole street bought a load of mansions tax free in Bermuda a few years back. All hail Tory Britain!

For someone of Hunt’s wealth forgetting about property you own is like misplacing the remote control for a day and having to change channels using the buttons on the TV. Annoying, but life goes on.

However, for the regular person it’s life changing. Only Hunt had the intelligence to forget so others could remember. A truly selfless act that will go a long way to solving the housing crisis.

Although, he has still royally fucked the NHS.