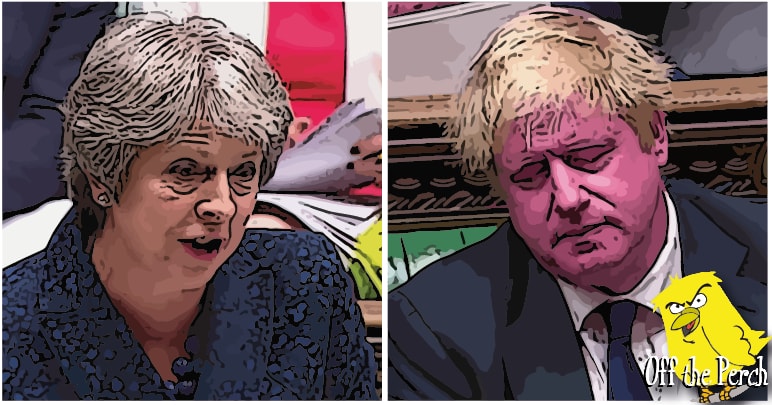 On 12 June, Theresa May is planning on bludgeoning all the Brexit amendments the Lords voted for through parliament. Anti-Brexit rebels were going to stand up to this act of dubious democracy, but now they’re worried it could help Boris Johnson become leader.

In other words, they’re worried they’ll be out of the frying pan and into the other frying pan.

The problem with the Tory party is that everyone in it is, at the very least, quite terrible. As such, the person leading it will almost always be relentlessly dreadful.

To decide who’d make the best (worst?) leader, Tories have been weighing up their attributes:

IS HAPPY TO WAVE THROUGH RACIST ACTS OF THE WORST KIND

HAS SOME SORT OF BREXIT PLAN

A PLAN THAT’S ACTUALLY FLESHED OUT AND CREDIBLE

AND WON’T LEAVE THE COUNTRY QUITE LITERALLY ON FIRE

Obviously, the two are neck and neck on most fronts. But what’s swung it for the timid rebels is this:

LIKELY TO REMEMBER WE CALLED HIM A FLUFF-HEADED TWAT-BRAIN IF HE BECOMES PM:

Things can only get worser

To be fair to the non-rebels, Boris Johnson probably would be a worse PM. It’s an unfortunate situation they find themselves in. One they could have avoided by not being Tories in the first place.