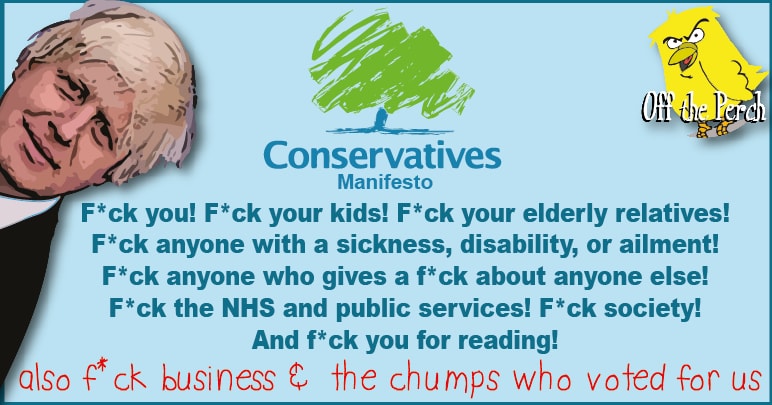 On the second anniversary of Brexit, the Tories have found themselves in a generous mood. As such, they’ve expanded the list of people they have no generosity for. But weirdly, the latest addition to the ‘Fuck List’ is ‘businesses’.

Weirdly because it’s usually businesses that pay the Tories to fuck everyone else.

Off The Perch caught up with one of the businesses that’s in line for a fucking:

I don’t understand it. How could they possibly come for us?

I seem to remember they came for poor people, and we didn’t speak out, because we were too busy drinking champagne and shouting ‘CH-CHING!’

They came for the foreign people next, which was was a bit of a worry, because we employed some of them. Turned out you can still underpay them even if they are being marginalised though, so it was a win-win.

Next they went for that Brexit thing, and we thought ‘hang on a minute, what the fuck is this shit?’ Theresa May said we were still in charge, though, so we assumed it would all be fine.

Now it turns out May’s been telling everyone she speaks to that they’re in charge, and the Brexiteers think it means they can fuck us.

Who could have fucking predicted they’d turn on us?

Although indiscriminately fucking businesses might not seem like the best idea, it’s worth remembering something. The people in charge don’t care if a few businesses fail or a few thousand people lose their jobs, as long as they’re still the ones in charge.

And also, despite their name, the Conservatives just like fucking things.