Far-right scammers wondering what to do with 10,000 '#FreeTommy' T-shirts - Canary 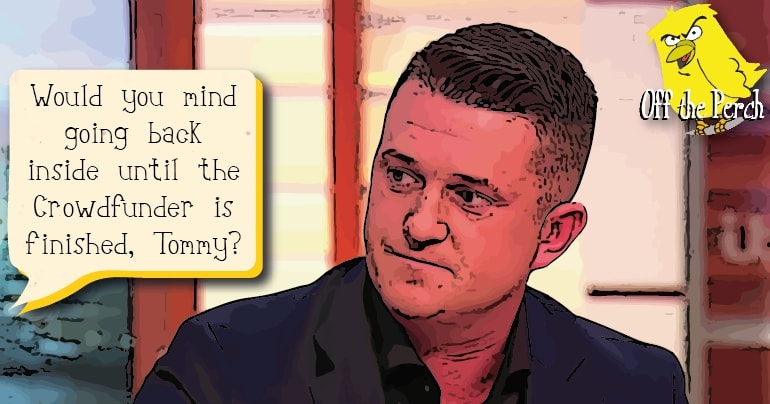 Tommy Robinson being sent to prison was the best thing to happen to the far right since Nigel Farage shaved his moustache.

"I think that politics needs a bit of spicing up" pic.twitter.com/FwCn8roVPQ

All that’s fucked now, as the courts have released him on bail.

Immediately after Robinson was sent down, a cottage industry emerged around the #FreeTommy movement. This saw far-right shitheads raking in money hand over fist – selling items like:

Tommy’s release leaves the sellers of this tat up shit creek. The upside is they do have paddles. The downside is no one wants to buy a paddle with a #FreeTommy logo on it.

Perhaps the most inconvenienced person of all is Katie Hopkins.

Hopkins was in the middle of recording a folk concept album called Tommy (But Not the One About Pinball). She’d even taught herself how to play the lute and sing in what one listener described as:

A hideous falsetto – a sound like an angry cat fellating a firework.

Still, though, there’s hope for them on the horizon. Tommy is out on a technicality, and he’s already admitted committing contempt. He could potentially even get a longer stretch when he’s re-sentenced.

As such, expect to see #FreeTommy turkeys in time for Christmas.