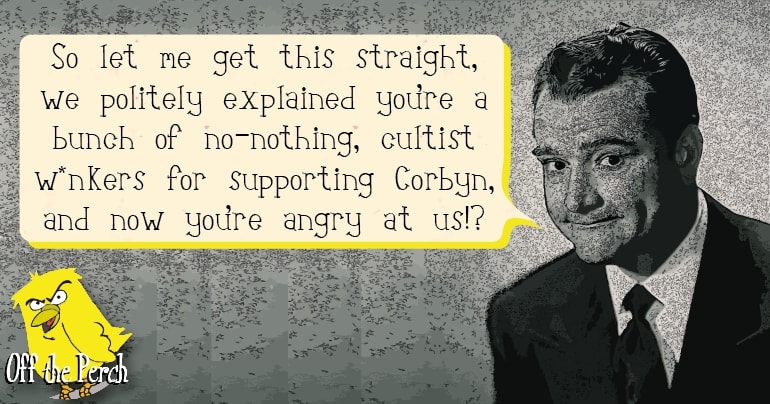 After several years of referring to eligible UK voters as ‘rabble’, ‘dogs’, ‘cultists’, and ‘Trots’, the political establishment has a question:

Why are these twats all so hostile towards us?

He’ll never win support – what are you voting for this tramp for, you politically illiterate dipshits?

When he turned Labour into the biggest mass-membership party in Europe, the political establishment calmly pointed out:

Every one of the new members is a Trotskyist Cold War sleeper agent – come on – everyone knows that.

When Labour achieved a bigger vote share swing than even Tony Blair, they elucidated:

Wow, if you can achieve that with us complaining constantly, obviously we’ve not been complaining enough. Why are you still not getting it – this movement is doomed to fail, and you’re all thick as fuck!

Despite this, people seem loath to listen to the establishment’s keen political insight.

Obviously, abuse isn’t helpful. Equally obvious is that if you use your lofty platform to denigrate massive swathes of denigrated and marginalised people, some of them are going to fight back.

Most people can see that. That’s why the tactic of stirring shit and running away hasn’t really worked.

Although, saying that, what do I know? I’m not a political genius like some. All I’ve got is an A level in obviousness.

Featured image via Library of Congress – Wikimedia [IMAGE WAS ALTERED]