May practises for Brexit questions by practising her answer - Canary 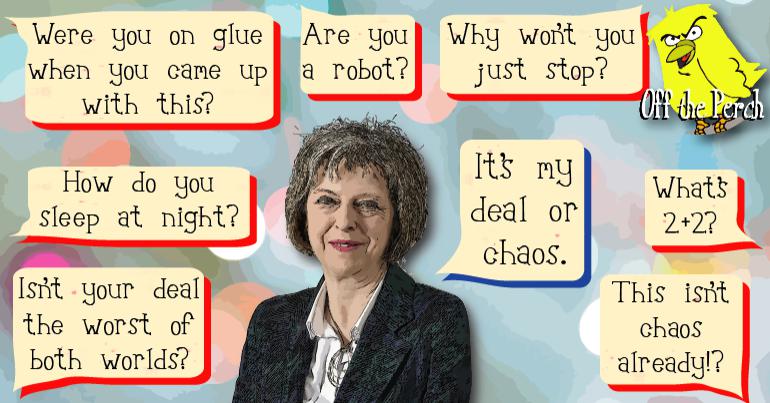 Do you find answering questions difficult?

Theresa May doesn’t have that option, but she does have a strategy. Namely: to answer every single question with the same answer.

The woman with all the answer

In the 2017 general election, May answered every question with:

To put it mildly, May’s government ended up offering less strength and stability than a Wonderbra made of toothpaste. The strategy worked, though, because people voted for this promised might and consistency.

As part of her Brexit prep, May originally threatened:

After she proposed a deal – a deal which is demonstrably quite bad – she changed that to:

Any deal is better than no deal.

She’s since spiced that up to:

Which may work on some people. Because if this right now – if this isn’t chaos, then how bad will no-deal Britain be?

Of course, May can’t get away with not answering questions forever. Oh no, wait, they’ve booked the debate on the BBC.

So yeah – looks like she will get away with not answering anything.