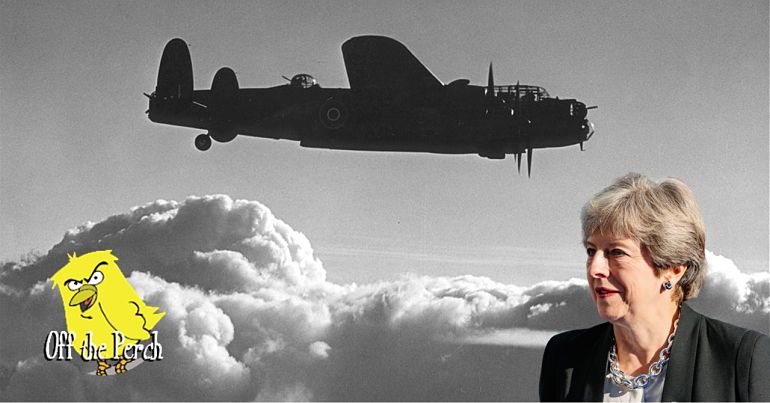 Plans are afoot for Theresa May to travel to Berlin in a reconditioned Lancaster bomber. The PM will hold direct talks with Angela Merkel, provided the doors don’t jam on the antique plane.

Off The Perch spoke to Letitia Febreze from the government’s Brexit department, DExEU:

Fresh from her triumph in the Commons on Tuesday, Mrs May will take a strong hand into her talks with Chancellor Merkel. And what says British strength more than a Lancaster? Planes like this flattened half of Germany. So I think Chancellor Merkel will think twice before trying any funny business.

It’s also really ironic because only last night a goof on the BBC News made it look like the PM was going to Brussels in a Spitfire. But no, she’s going to Berlin in a Lancaster. Ha ha ha!

We’ve decided against going back to Brussels anyway, because they never agree with us.

May won’t actually be flying the plane herself. Joystick duties will be handled by David ‘Dave’ Davis, who Off The Perch understands has spent the last two and a half years obtaining his private pilot’s licence.

This is clearly just an attempt to piggy-back off all the ludicrous ‘spirit of the blitz’ nonsense going round. If it’s not ERG types frothing about ‘Teutonic arrogance’, then it’s the BBC running pointless puff pieces on WW2 museums. I suspect some brainstorming meeting in a Whitehall bunker has seen a minister pull out a Dig For Victory poster or a Keep Calm And Carry On tea towel and say ‘This is how we’ll get the country onside’. It’s shameless really.