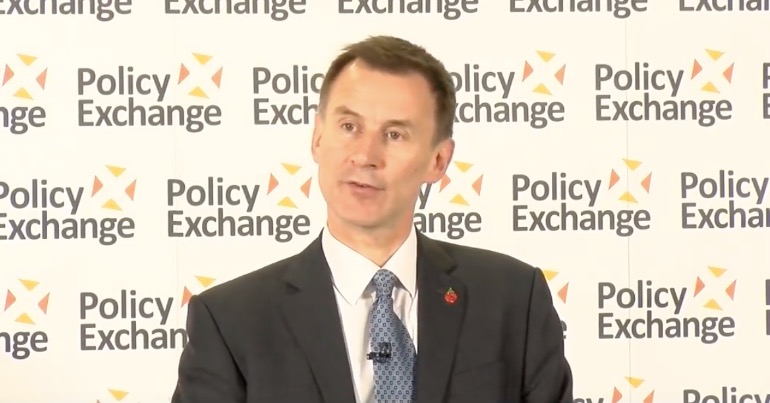 Jeremy Hunt appeared on BBC Radio 4 on 31 January to condemn the “humanitarian catastrophe” in Venezuela. But the foreign secretary’s complaint was deeply hypocritical. Because his own government’s policies are causing similar suffering the UK.

On the Today programme, Hunt stated:

Indeed, people going through bins for scraps of food suggests a humanitarian catastrophe. But that’s what’s happening right now under Hunt’s own government.

A TES poll showed that 88% of school staff had witnessed a rise in the number of pupils turning up to school hungry. Nine out of 10 teachers have taken it upon themselves to give food to their starving pupils.

Somebody had discarded a half-eaten apple, and another child had taken it from the bin and was eating that apple – what was left of it.

Siobhan Collingwood is the head teacher of a school in Morecambe which has witnessed first-hand the horrors of poverty in the UK. Collingwood says one in 10 of her pupils come from homes using food banks. She told the BBC:

When children are food deprived it alters their behaviour and they do become quite food obsessed, so we have some children who will be stealing fruit cores from the bins.

Collingwood claimed that more problems have arisen since the introduction of Universal Credit. She said that parents have been “arriving at school literally bursting into tears telling me they have no means of feeding their children”.

Teachers say changes made to the benefits system by the Conservative government are one of the most common reasons why pupils are turning up to school starving.

On his own website, Hunt claims that Universal Credit “is a fair benefit that protects vulnerable claimants”. But, according to teachers, it’s causing children in the UK to search through bins for ‘scraps of food’, just like he says people are doing in Venezuela.

As The Canary previously reported, Venezuela has been suffering from a severe economic crisis. This has seen hyperinflation and shortages of goods, medicines and food.

There is strong evidence to suggest that the US and its allies have used tactics of “economic warfare” in order to destabilise the current government in the country. US sanctions, for example, have crippled the Venezuelan economy, with a former UN rapporteur saying:

US sanctions on the country are illegal and could amount to ‘crimes against humanity’ under international law.

Many Venezuelans are experiencing severe hunger as a result of the economic crisis. And intensified Western intervention will only make the situation worse.

On Radio 4, Hunt didn’t extend the same sympathies to the starving citizens of his own country; just to those whose government he’d like to see overthrown. If the foreign secretary is seriously concerned about hunger in Venezuela, he should be denouncing the illegal US sanctions and economic warfare, not meddling and making it worse.

As teachers have pointed out, the Universal Credit rollout is one of the main causes of hunger in the UK. So Hunt should be fighting Universal Credit and the subsequent suffering that it causes. People eating from bins shouldn’t happen in any country. Let alone in one of the largest economies in the world.