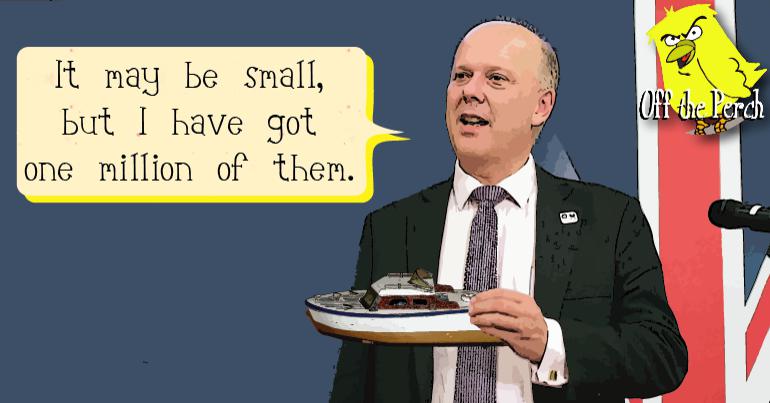 Chris Grayling has a history of incompetence so profound it feels like he’s auditioning to be the next Mr Bean. He recently gave a ferry contract to a company with no ferries, only for the deal to sink unexpectedly. This meant he quickly had to acquire a million pounds’ worth of ferry – a challenge he’s sort of followed through on.

I realise some people might poke fun, but we got a pretty good deal actually. Bought individually, these toy ferries would have cost £1,000,050 – I got them for £50 less than that.

When it was pointed out that life-size humans couldn’t cross the sea in toy-size ferries, Grayling continued:

Yes, well it’s very easy to criticise, but it’s a lot harder to come up with solutions.

When asked if this meant he had a solution, the transport secretary said:

Umm… I suppose we could… err… beavers? We could dump the toy ferries into a river, and see if beavers gather them into one, great mega-ferry?

The hopeful expression on Grayling’s face peeled away when he saw how people were looking at him. He then fled from parliament and climbed into his Land Rover. As he’d bought his car from the same website as the ferries, this proved to be somewhat amusing to watch.

Theresa May has assured the country that ‘due diligence’ was performed on the latest ferry deal. When asked to clarify what ‘due diligence’ meant, May attempted to flee in her car. As it had been purchased by Grayling, watching this proved to be…