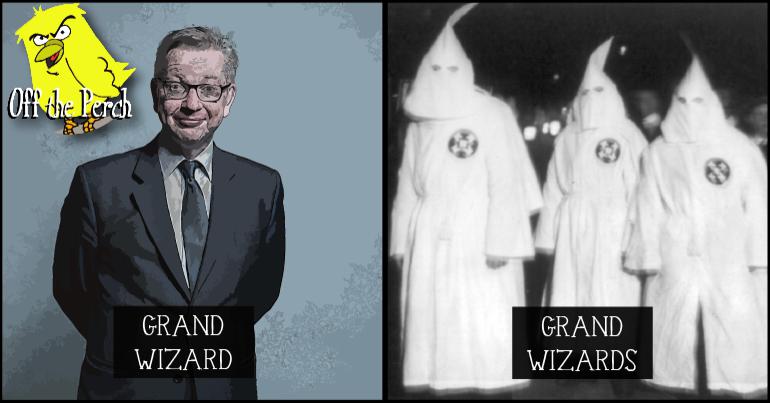 Senior figures in the Tory Party have decided to name themselves after the head racists of the Ku Klux Klan:

Isn’t ‘Grand Wizard’ a KKK thing?! Why would you coin that nickname for yourself? 😳 https://t.co/g1mCYTIYaE

Unfortunately for the already-beleaguered Tories, the KKK has decided to sue.

The KKK’s current grand wizard – one Shitbo Sluggins – had this to say:

We’ve been watching the UK Conservative Party for some time now. It’s clear they’ve been copying our stuff – who do you think invented the ‘hostile environment’? We didn’t mind that, as the more racism the better, to be honest. But seriously, guys – NOW YOU’RE STEALING OUR WIZARD STUFF!? THIS SHALL NOT PASS!

Why can’t we be wizards too? Play fair, guys! Surely two organisations with similar outlooks on society can refer to themselves as ‘grand wizards’ without anyone inferring some sort of link?

The BBC’s political guru Laura Kuenssberg has since tweeted:

I’m hearing that the Tory bigwigs will now be referring to themselves as the ‘herrenvolk’ – a German word that translates as ‘master people’.

She followed up on this a few hours later:

Apparently the copyright for ‘herrenvolk’ is owned by one A. Hitler. Seems to be an honest mistake; hopefully they’ll have better luck with their next nickname – the ‘Pale Anglo Crusaders of Odin SS-Front’.